Like every other vendor in the server racket, IBM has two basic rack-based servers based on any two-socket Xeon server generation: a 1U machine – lovingly called a pizza box – with limited peripheral expansion, and a 2U machine with more room to add stuff.

The pizza box in the new System x lineup is the x3550 M4, and as its name suggests, it is related to the tower box. As with the x3500 M4, all sixteen of the Xeon E5-2600 processors are supported in the x3550 M4, and the machine similarly has 24 memory slots across its two sockets, which top out at 384GB today using 16GB DDR RDIMM sticks and which will be boosted to 768GB max when 32GB LR-DIMM sticks come out later this year.

The machine has four Gigabit Ethernet ports on the mobo, and an integrated 6Gb/sec SAS controller on the board with the RAID 5 option. The system has room for two rows of 2.5-inch disks stacked horizontally in the front of the chassis, or three 3.5-inch drives side-by-side.

The x3550 M4 has two PCI Express 3.0 slots: one low-profile, full-length x16 slot and one full-height, half-length x8 slot. If you add the second CPU to the box, you can convert that x8 slot to an x16 slot or downgrade it severely to a PCI-X slot to plug older cards into the box.

The new System x3650 M4 rack server doubles the chassis height to a 2U form factor, giving you enough room to rotate those 2.5-inch drives by 90 degrees and line up 16 of them, side-by-side.

This 2U machine is the workhorse of the enterprise, often supporting database and application servers, while the 1U machines typically run infrastructure workloads such as Web serving. The full Xeon E5-2600 lineup is once again available in the System x3650 M4, and the same memory options and constraints of the x3550 apply.

The machine can support one disk bay with eight 2.5-inch drives, and you can add a second one to get to the full 16 drives; you can also get a single bay that supports up to six 3.5-inch drives. If you really like lots of SSDs, IBM has an option that will let you plug in 32 of its 1.8-inchers.

The System x3650 has three base PCI-Express 3.0 slots – all of them x8 – and you have to add the second processor and a second riser card to the machine to add three more slots. There are three flavors of risers: the first has three x8 slots, the second has one x16 slot and one x8 slot, and the third has one x16 slot and two PCI-X legacy slots. You have the same quad-port Intel LOM providing basic networking, with a slew of other networking and disk controllers available for the PCI slots.

On the blade front, there's only one new machine, the BladeCenter HS23. This two-socket blade is a single-width, full-height blade that can slide into the existing variations of the BladeCenter enclosures.

The HS23 blade doesn't have enough room for the full 24 memory slots, so this one is crimped back to 16 slots and therefore maxes out at 256GB using registered DDR3 main memory. The memory is laid out in an interesting fashion, as you can see below: 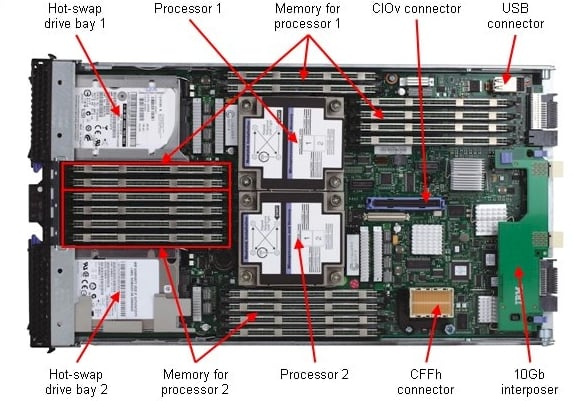 Internals of the BladeCenter HS23 blade server (click to enlarge)

The HS23 blade has two hot-plug 2.5-inch drive bays and an integrated LSI SAS2004 disk controller. The CIOv slot is a special connector on the HS23 blade that implements a PCI-Express 3.0 slot that is actually extended to an adjacent blade, and the CFFh expansion slot extends a PCI-Express 3.0 x16 slot to outside of the blade into the chassis as well.

This CFFh I/O expansion slot was used to snap up to four expansion blades equipped with Nvidia Tesla GPUs together and to a prior-generation HS22 blade server based on Xeon 5600 processors. The interesting thing about this CFFh interconnect is that if you use it to stack up one blade and four GPUs, the top CFFh port is still open to attach to other PCI peripheral slots.

The HS23 has a 10GE interposer card on the mobo to provide integrated (and virtualized) networking. There are a bunch of different virtual fabric adapters from Broadcom, IBM, and Emulex available for the HS23, as well as a mix of other Ethernet and InfiniBand cards from QLogic, Broadcom, Intel, Mellanox, and Brocade. 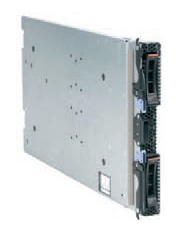 The four servers outlined above will start shipping on March 16.

Each of IBM's new Xeon E5-2600 machines support Microsoft's Windows Server 2008 R2 in its many permutations. Red Hat's Enterprise Linux 5 and 6, and SUSE Linux' Enterprise Server 10 and 11 are certified to run on the System x3500 M4. VMware's ESXi 5.0 hypervisor is supported for server virtualization. The servers have an integrated USB flash port for storing the hypervisor, if you want to do it that way.

Next page: Neither a blade nor a rack – a platypus of sorts
Page:
Corrections
5 Comments