Most weapons are familiar from Mass Effect 2 and can be upgraded at workbenches, and customisations can be bought and found. Due to weight restrictions, I can only carry so many weapons, which definitely made me think twice about my load out. Armour upgrades and character appearance add more individual touches – pink armour and having a fist fight in a rubber dress should never be frowned at. 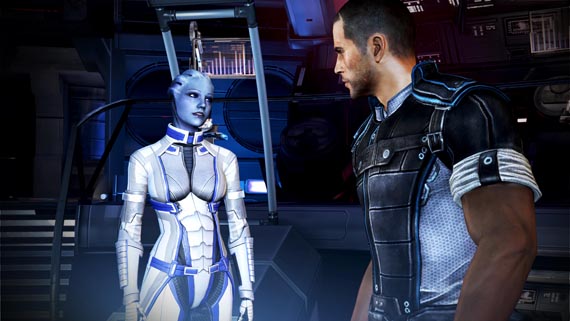 You seem a bit blue, are you OK?

Also recognisable is how experience points are spent from Mass Effect 2. I started with points in Offensive Mastery, fitness and throw. The clean design and functionality of the Mass Effect UI make fiddling with my stats a pleasure. Mêlée attack is thrilling, as Mass Effect 3 introduces a new weapon, the omniblade, for when a husk creeps up behind me. As long as I use cover and keep my shield powered up, things don't get too hairy, even against the biggest mechs.

The gameplay could sometimes come across a little samey, but the depth of the storyline kept me connected. And when someone close to me died – and this happened a lot – I felt a genuine pang of sadness. All this emotional trauma is obviously getting to me, because I am haunted in my sleep – maybe I should lay off the Peruvian whisky? 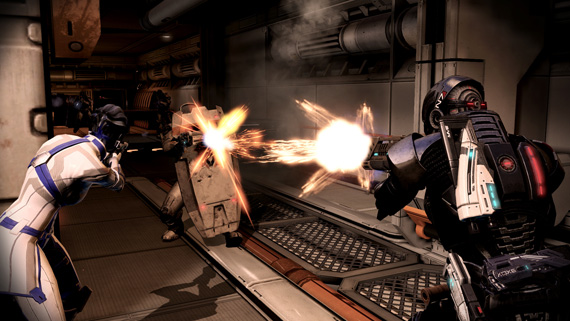 Selecting which combination of my teammates would be most useful for backup before I head into battle was important but more often than not I took along Liara. Having her throwing a singularity into enemies with shields made combat with multiple baddies a breeze. Overpowered, you say? Well, I'm not complaining. No flanking tactics needed, even with that improved enemy AI.

Truly epic cut scenes – often with impressively huge beasties – play out a narrative that, at its worst, is a pompous space soap opera, but at its best had me shouting, sighing and laughing. The seamless transition into the combat sequences kept me constantly at the edge of my seat waiting for the next husk to show up and feel the sting of my omniblade. 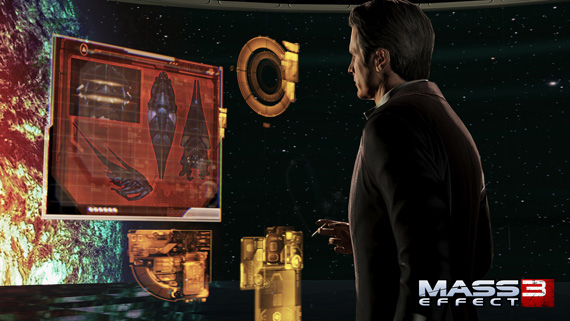 Got ship all over the screen

Mass Effect 3 features multiplayer for the first time with Galaxy at War. All I can think is: why? I have to admit it is fun and could be more so when my mates come on-line but honestly Mass Effect 3 isn't about the multiplayer. If I wanted multiplayer I would be fragging ass in Battlefield 3. Galaxy at War reminded me of Left 4 Dead but fighting waves of Reapers, instead of zombies. Call me paranoid, but it feels like Bioware is trying to prepare me for the imminent clusterfuck that will be the upcoming Mass Effect movie.

Mass Effect 3 is about choice and that's what drives this immense narrative. Bioware has invited me to be part a story so nuanced with action so compelling that it raises the bar. Building and refining an adored franchise wasn't going to be easy but Mass Effect 3 is everything I wanted it to be and more. ®