Just like a real computer: Android gets Android IDE

AIDE is at beta version 7, but already allows the editing and compiling of apps, as well as automatic error checking (and fixing) and LogCat visibility. The free application is even compatible with projects started on Eclipse, which is important as one might not want to create an entire commercial app on a mobile phone – but at least with AIDE one theoretically could. 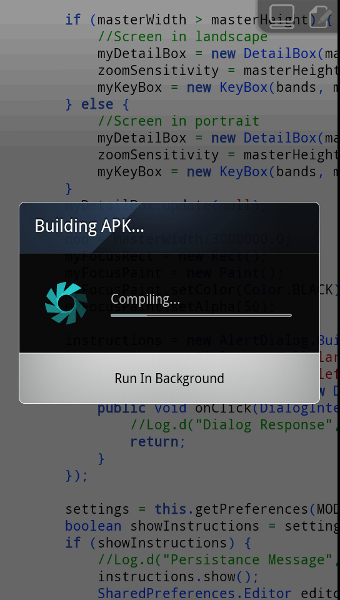 This application was compiled on a handset, but a tablet and keyboard are recommended

Android, in common with most embedded systems, requires software to be written and compiled on a desktop computer. On-device application development has traditionally been limited to high-level languages if it was available at all – your correspondent developed commercial software on a Z88, and a Psion MC400, but both of those were using interpreted languages rather than compiled.

Compiled languages require a decent processor to chomp through the conversion of the entire application into suitable machine code, while interpreted languages convert one line at a time while they're running, so on-device compilation requires more processing power than has typically been available on mobile devices.

But that's not true any more; an Android tablet (which is what AIDE is really aimed at) has more then enough processing power to compile Java applications*. And if Android is going to provide a viable alternative to traditional operating systems, then it's ironic to demand every developer own a desktop system too.

But this model makes sense if the same company makes money from both, as Apple does. Apple's clear delineation between mobile and desktop systems is a strength. Palm made mobile computing popular by not trying to make a mobile computer – the Palm Pilot was just corner of one's Windows desktop, not the whole desktop – and Apple has replicated that experience with iOS.

Android wants to be all things to all men, and risks being driven by engineers who think that's a good thing. It's notable that the AIDE team, which created the on-Android development kit, is a small group of German Android fanatics with no business plan or concept of how (or if) AIDE might develop in the future. They're just keen to make Android the only platform that anyone, even software developers, needs. ®

* Java programs are compiled, generally at least twice just to be sure.