Apple has released an update for its Safari browser that patches a record number of serious security vulnerabilities, promises JavaScript performance improvements, and eliminates the annoying "white flash" page-switching bug.

The JavaScript performance increase isn't trivial: Apple promises an "up to" 11 per cent speed-up. Neither is the number of security vulns fixed: 83 – a load that Computerworld says is a new record, surpassing the 62 vulns fixed in Safari update 5.0.4. 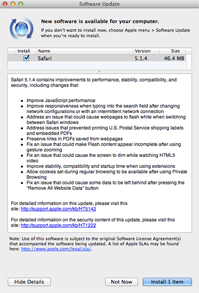 By the way, don't bother checking the web page to which Apple sends you for details on Safari 5.1.4's security update – at least not yet. As is Apple's tradition, they're late on providing that info, and the page had yet to be updated by 10:00am Pacific Time on Monday. Check that first link in our previous paragraph, instead.

The vast majority of the patches – 72 – are for vulnerabilities in WebKit, including some that could, in Apple's standard wording, result in the dreaded "arbitrary code execution". Another vuln, now fixed, allowed cookies to be set even when Safari was set to block them.

Other niceties are also delived in Safari 5.1.4. For example, links in downloaded PDFs are now preserved, a bug that caused screen dimming when watching HTML5 movies has been fixed, and cookies that are set during regular browsing sessions are now available during Private Browsing sessions – meaning that any cookies you set when you were in the open will work when you're hiding, but you still won't set any when you're private.