Today's lesson: give up your rights

Updated A nationwide school arts project that commercialises children's artwork has been branded "the biggest blag in the history of the UK".

Face Britain, a world-record breaking attempt supported by the Prince Charles's Foundation for Children and the Arts, has gathered some 70,000 self portraits from youngsters since it was launched.

But the children are required to surrender "all intellectual property rights" when they upload their handmade images. The young artists can then buy back their creations in the form of mugs, mouse mats and T-shirts - but don't appear to get a penny back for the commercial exploitation.

Photographer and parent Justin Leighton was stunned when he read the T&Cs of the project, which in which his local primary school is participating.

"It's presented as a charitable endeavour to support the arts - but it does so by ripping off every artist who takes part," he told The Reg.

"It's the biggest copyright blag in the the history of the UK - it's IP theft on an industrial scale. I don't care if you're six or sixty, you need to know your rights," he added. See below for the copyright form. 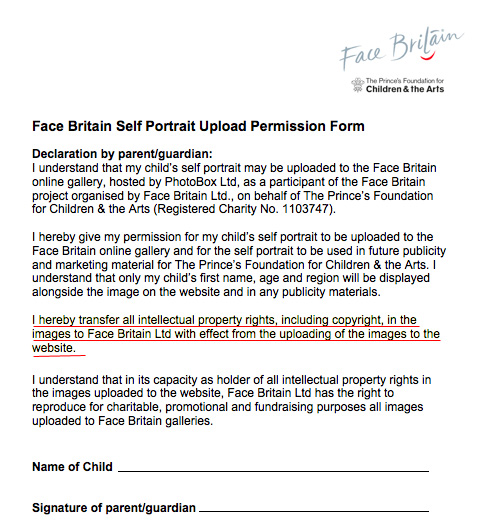 The foundation's boss Jeremy Newton told us that the project requires full rights in order to transform images for use on a composite projection of the Queen.

"We weren't sure how we'd change the images for this big projection. We need a legal power to use the image which is flexible enough for us to blend it into an image of the Queen, that the whole image revolves around," said Newton. 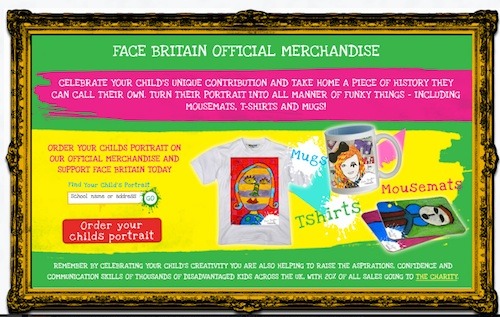 Merchandising: prices have yet to be announced

He did, however, appear to be unclear on just how extensive those rights are in reality, and added: "The issue on licensing is not as simple as saying that children are the creators. They use brushes and paints other people have given them. They create the image in school or at home."

Newton told us that he would update the website to explain why the foundation required all IP rights. He also told us that 20 per cent of the proceeds would immediately go to the foundation, and anything left over after production and distribution costs would got to the organisation's charitable works.

"It's high-handed," complains Leighton. "Children don't know what they're giving away."

Indeed, copyright education in schools, if you can find it, focusses on lecturing pupils about infringement, rather than the more useful message that young people have powerful economic rights that can empower and increase their independence. If teachers and pupils were a bit more copyright-savvy, they'd be taking a share of profits from their work.

As it is, it looks like giving children an education in the plantation economics of Web 2.0: you do the creative work while some middleman takes the cash. ®