Shuttleworth: Ubuntu rockets up at enterprises

If data presented in a in a blog post by Ubuntu project founder and "benevolent dictator" Mark Shuttleworth is any indication, then Canonical's Ubuntu variant of the Debian strain of Linux is waxing on public web services while Red Hat's Enterprise Linux (RHEL) is waning.

The Ubuntu project leader backed up this claim with data gathered by Austrian market researcher W3Techs, which polls the top 1 million Web sites in the world, based on their rankings with Amazon's Alexa service, and cases the various software technologies powering those sites.

In his blog, he singled out Ubuntu versus RHEL and only for a subset of the data for sites using Linux on some aspect of their public web sites. Many Web sites have multiple operating systems running across their web infrastructure, so the percentages add up to more than 100 per cent. Here's the trend lines for Ubuntu and RHEL over the past year. And yes, it was silly to have RHEL in black and Ubuntu in red, but there you have it: 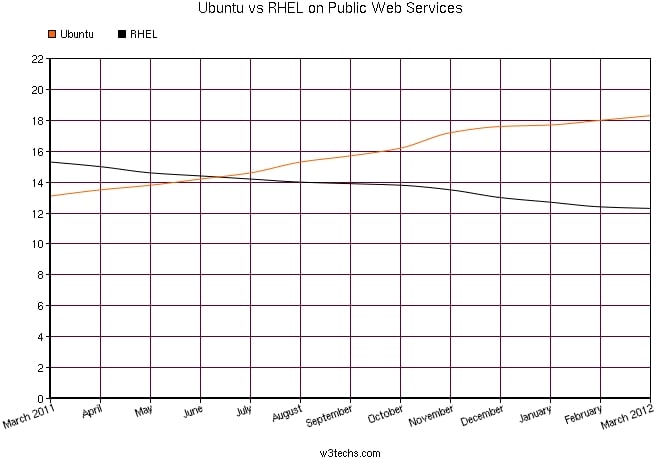 Ubuntu on the rise, RHEL slipping a bit (click to enlarge)

"The trend is even starker if you look at what we know of new-style services, like clouds and big data, but since most of that happens behind the firewall it's all anecdata [sic], while web services are a public affair," Shuttleworth continued.

But don't get the wrong idea. The web is not just about Ubuntu versus RHEL. Hardly, in fact.

W3Techs shakes out redirects like www.sun.com now jumping to www.oracle.com. So the number of sites in the data is actually a little lower than 1 million. And across those sites, Ubuntu distributions were in use on a little more than 4 per cent of the sites pestered by W3Techs' spiders in March 2011, and this has growth pretty linearly to just a hair over 6 per cent of sites by this week.

That's impressive growth, of around 50 per cent, and nothing to be laughed at in any way. But if you poke around the W3Techs site, you will see that Unix is in use on 63.6 per cent of the sites polled on March 14 by the company, with Linux of any flavor being used by 32.8 per cent.

Most of the Linuxes in use on public web sites are not an Ubuntu distro, and if you look around some more, you'll see that Windows in one form or another is identified underpinning at least some of the functionality of 36.4 per cent of those nearly 1 million web sites polled by W3Techs.

None of this W3Techs data adjusts for the number of machines that are in use with any particular operating system – one Windows machine or one Ubuntu machine counts as much as 10,000. This is a pretty serious limitation of the data, obviously. But as Donald Rumsfeld once famously quipped, you go to market with the data you have. (Er, shurely you meant "You got to war with the army you have, not the army you might want or wish to have at a later time.")

The dicers and slicers at W3Techs drilled down into Linux usage on public web sites back in January, and as it turns out, the Debian variant of Linux, which W3Techs counts distinctly from Ubuntu, just as it counts CentOS as distinct from RHEL and Fedora, was the most popular Linux after a neck-and-neck race throughout 2010 and 2011 with CentOS.

Red Hat, Fedora, SUSE Linux, and Gentoo are all on the decline, with the latter three having relatively small slices that add up to 10 per cent of Linux installs on public web servers today. Debian and CentOS are hovering around 30 per cent each of the Linux base on public web servers, and Ubuntu was around 18 per cent of all Linuxes and growing fast. This link will give you a bar chart of Linux distributions for the current snapshot of data without the trends.

The point is, out there on the web, Ubuntu has a long ways to go to catch Debian or CentOS, and even further to catch Windows or Unix in this data, which counts existence not units.

Shuttleworth expects the Ubuntu trend to continue, and in part thanks to the April launch of the "Precise Pangolin" release, to be known as Ubuntu Server 12.04 Long Term Support and the future "Essex" release of the OpenStack cloud fabric controller.

"OpenStack's Essex release is lined up to be a perfect fit for 12.04 LTS," said Shuttleworth. "That is not a coincidence, it's a value to which both projects are committed."

Ubuntu Server 10.04 LTS, the last long-term support release, certainly put the Eucalyptus cloud controller, which emulates Amazon's EC2 compute cloud, on the map, with over 12,000 clouds up and being tested by launch day in April 2010.

To be sure, many of those Ubuntu-Eucalyptus clouds were test beds, but some were real and in production. And Ubuntu Server 12.04 LTS, which will have OpenStack embedded in it, will very likely give the same bump to OpenStack clouds. And maybe the enthusiasm for OpenStack will create a feedback loop, pumping up Ubuntu as well. ®