Where in the world is our lawnmower?

Poor weather has played havoc with our blade-testing, so the Genuinely Autonomous Garden Assistant (GAGA) team has been focusing on location-tracking technologies, with near-uniformly disappointing results.

Who would have believed that in the first years of the 21st century, a robot going about its business could not be followed with precision by its makers – albeit equipped with minds only marginally superior to theirs. But despite rigorous trials of a range of location-tracking technologies, it's proving deuced difficult to work out where our robot is at any given moment, and so we find ourselves appealing to El Reg readers for additional angles of injury.

Our first thoughts were to use a painted pole, spin until the pole appears on a camera display, and then measure the length of the pole to get the distance. NASA used the same technique for testing the Astronaut Manoeuvring Unit – the free-flying astronaut held up a notched stick to measure distance from the shuttle – so if it was good enough for NASA it was probably good enough for us.

Sadly NASA had some distinct advantages, not least the lack of changeable light conditions, the uncluttered background and the competent operator. Our test photographs showed that picking out a coloured pole in a residential setting was a lot harder. 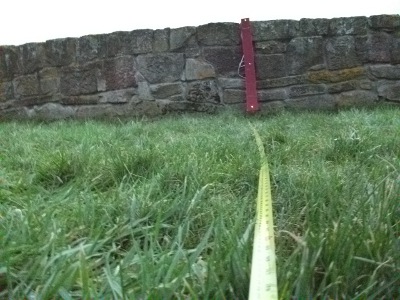 The same limitation has prevented us exploiting the one technology which might have been able to answer our needs. Basic radio triangulation is all but impossible thanks to the unreasonably fast speed of light, which requires breathtakingly accurate clocks, not to mention the annoying habit of radio waves to bounce off things and thus arrive later than expected. Ultra wide Band (UWB) radios can be used for triangulation thanks to their very low-power transmissions, and the accuracy is good, but sadly Ubisense wanted £12,000 for an evaluation kit, for which we could probably have employed a gardener.

Cheap and cheerful, but Wi-Fi is also inaccurate

Much cheaper is Wi-Fi positioning, or radio fingerprinting as it's often known. This can make use of existing Wi-Fi infrastructure, accurately measuring the signal strength at different points and compiling a database of "measurers" against locations. That's the technique you see when Wi-Fi positioning is demonstrated various events and at a glance would seem ideally suited to our needs (as the garden is already well-covered for Wi-Fi):

But yet again it all falls apart when one gets down to the details. Wi-Fi is absorbed by water, so humans have a huge impact on the strength of the radio signal. Wi-Fi location solutions firm Ekahau was keen to get involved in the GAGA project, but couldn't promise accuracy greater than five metres, so we'd probably end up mowing the neighbour's car as much as the lawn.

RFID tags were another dead end we explored with all the optimism of enthusiastic amateurs who have no idea what they're doing. Such tags are very short range, a dozen centimetres or so, but they are cheap and induction-powered – and so could be pushed into the turf to provide precise location information to a reader mounted under the robot. It's not ideal, but it sounds feasible until one starts looking at the mathematics: a lawn measuring 30m by 20m has 600m2 of turf, each square metre of which contains 25 squares measuring 20cm each side (so a tag in the centre could be read). So now we're pushing 15,000 tags into the lawn, which might be possible, but certainly isn't very practical.

It would be a lot easier if one could read the strength of an RFID signal, and then use a higher-power reader to read multiple tags – and in that way establish a radio fingerprint database of the garden. Unfortunately we've not been able to find any hardware which will report the signal strength of an RFID tag, but pointers are welcome.

At about this point we decided to try measuring distance again, this time using coloured LEDs in the hope they'd be easier to spot during the analysis even if it meant we could only mow the lawn at night. Turns out the colours don't really travel: 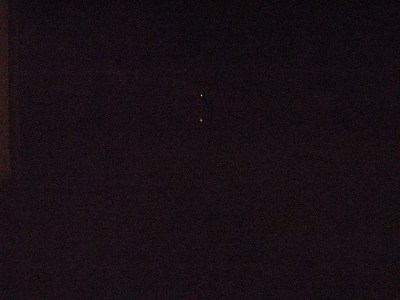 So back to RFID tags. We might well use a few, to let the robot know when it's reached key locations, and we also considered them an ideal way to get around the chief limitation of GPS (which was starting to look like the most sensible option), though it turns out the chief limitation wasn't the only limitation.

Next page: The rise, and fall, of GPS positioning
Page: