NASA has set March 18 as the soonest revised date for the launch of its NuSTAR X-ray satellite observatory, after delaying the “flight readiness review” it had scheduled for March 13.

According to NASA’s mission page, NuSTAR is now on a six-day countdown (at the time of writing).

NuSTAR is a belt-tightening novelty for the big-spending space agency: although it’s designed to catch hard X-rays from distant galaxies, it’s working to a shoestring budget of just $US165 million. 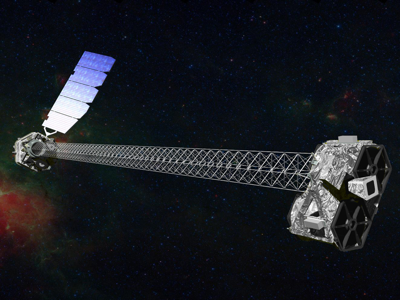 Part of the low cost comes from an unusual launch approach. NuSTAR will be carried by a Pegasus XL vehicle which itself will be released from an Lockheed L-1101 aircraft over the Marshall Islands (where it now awaits lift-off).

NASA says the delay is “to allow time for a review of data and simulations to qualify software associated with a new Pegasus flight computer.”

NuSTAR – the Nuclear Spectroscopic Telescope Array – is designed to detect “hard” X-rays at energies between 5 and 80 kiloelectronvolts.

This radiation penetrates mirrors, which make it hard to focus onto a detector. The design team has created a sandwich of thin films, each of which is tuned to reflect photons of a specific energy. These films are arranged as nested conical shells.

The mirrors are arranged so that instead of trying to capture X-rays striking them directly, they capture X-rays that are nearly parallel to the mirror surface. This, however, means there’s a much smaller collection area – a problem overcome by the nested mirror arrangement used in NuSTAR.

The other design challenge, according to Nature, was to build a low-cost structure with a long focal length, and make it small enough to fit inside the Pegasus rocket. The solution was to create a 10-meter folding truss which will have to be deployed after NuSTAR reaches orbit.

Once in space, NuSTAR will be able to detect galaxies – in particular, the active galactic nuclei, which give off X-rays as energized particles orbit black holes – that are hidden from current instruments by dust and gas. According to mission partner Caltech, the instrument will be “100 times the sensitivity of previous missions that have operated in this part of the electromagnetic spectrum.”

Its initial two-year science program also includes a black hole survey, mapping remnants from recent stellar explosions, and searching for the remnants of exploded stars in the Milky Way. ®