Save one MILLION dollars, get 32% more speed

An Oracle mid-range ZFS storage array has beaten a NetApp filer on a SPEC benchmark, despite costing just one-fifth of the NetApp price.

The SPECsfs2008 is designed to evaluate the speed and request-handling capabilities of file servers utilising the NFSv3 and CIFS protocols. We're only concerned with NFS here.

Our chart includes a Huawei Symantec N8500 and a FAS6080 for added context. The Sun ZFS box beat the Netapp FAS6080, an old top-end box, tested in August 2009, as well. That shows how midrange filer performance has improved. 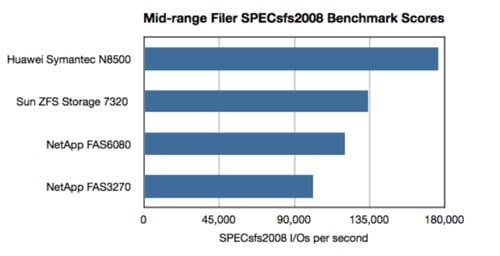 The NetApp FAS3270 system was tested in September 2010 and Oracle's box was tested in February 2012. The FAS3270 used 360 hard disk drives, while the newer ZFS box had 136 disk drives, six 512GB read cache SSDs and six 73GB write accelerating SSDs. It was 32 per cent faster and, really, you might have hoped it would be faster still. We wonder what a FlashCache-enhanced FAS3270 would do.

The Oracle-NetApp pricing difference is huge and, on the face of it, paying $1,035,698 more for 32 per cent less performance is not an attractive idea for a basic NFS file-serving box. ®