Take your hands off me - I'm a tech VC superstar!

Rohan stole the show, with his announcement that my old pal Jimmy Wales is coming to advise the knuckle-draggers in Whitehall. Well, you can thank the Bongmeister for this one. I was one of the seed investors in Bomis many years ago - and on the subject of babes and bourbon, you can't do much better than listen to Jimbo.

Lots of other switched-on govern-mentors were over at SXSWi to promote the new Gov 2.0 platform. No 10 really gets this, and says it's "digital by default".

That brilliant slogan sums it up for me. Digital isn't like some sex toy that arrives without a battery, which leaves you having to run to Mr Patel the newsagent and discover he doesn't have the right size. Gov 2.0 isn't like that. With Gov 2.0, the battery is built right into the hardware, like an iPhone. In particular, the beta "UK in the USA" site showed what web innovation really looks like - it's making our ship movements open and social.

And it's fantastic to see British marketing at its best: 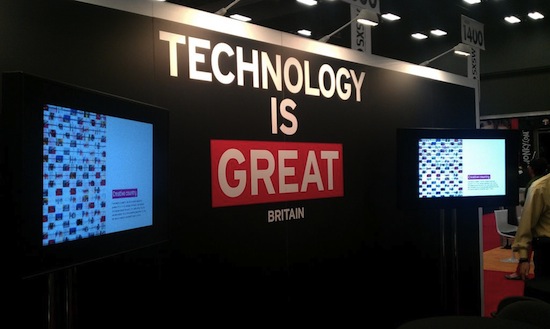 Get it? That's the name of the country, guys. And it's what we think of the web. What we're saying is: "We're civil servants - and we LOVE using the WEB!"

Even hobos must learn the etiquette of social

Now I mentioned SXSWi was a bit of a bummer for me. I blame the crazy decision to hire guys to walk about selling "top-ups" to us visiting investors. Well, in the Shoreditch investment community, that's standard practice. We're a work-hard, play-harder community. The flamboyant facilitator Lafayette Fenwick-Symes - you'll know his workspace in the glossies - prefers to employ very tall young gentlemen from Mali to dispense the pick-me-ups - and lovely lads they are, too. Only here in Austin somebody had the idea of perking up the party using characters including … wait for it … at least one guy just let out of prison!

These peeps walked around with T-shirts saying "I'm a 4G Hotspot". Well, I tried to be subtle, but they kept refusing me the goods. And they were asking for money too - which really isn't very cool at all.

And then when I wrestled one to the ground demanding "Now you give me an APPOINTMENT with CHARLIE" that they called security.

I must tell you that as a titan tech investor, I have better things to do than spend three hours of valuable venture networking time in an Austin police cell.

I explained to the authorities that it was the hobo who started with the aggression, and explained that I had friends in High Places ("Do you even know who Rohan Silva is??"). I think that clinched it, then they let me go. I think the cops gave the guy a real kicking, though. The sound of teeth falling onto cement will unfortunately be one of the memories of SXSW Interactive 2012 that I won't be able to remove with Diazepam.

There's a moral here, guys. Don't ever meet a major tech investor without being prepared to give up the goods. And as for you hobos - you had better shape up or ship out. ®

Steve Bong will be contributing regular reports from the heart of Shoreditch on Britain's technology startup miracle. Follow him on Twitter at @bongventures