Virile Norse mice rampaged through Scotland, Ireland and Iceland impregnating locals and mixing their Viking mouse genes in the native rodent populations, according to research published by the BMC Evolutionary Biology journal. 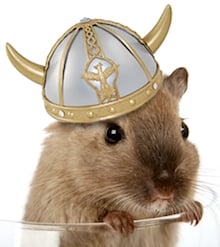 Artist's impression of a Viking mouse
in an ill-fitting helmet

Boffins found that the spread of a particular Norwegian mouse gene in northern Europe "remarkably" mirrored the spread of human genes by Viking marauders. The Vikings brought animals including horses and sheep on their long boats, and the sexually active house mice must have crept onboard too.

The team, led by Eleanor Jones of Uppsala University in Sweden, pored over ancient mouse DNA samples from the 10th and 12th century, comparing them to genetic samples from mice today. The research found that "in the North Atlantic region, human settlement history over a thousand years is reflected remarkably by the mtDNA phylogeny of house mice".

Like their human counterparts, today's Icelandic mice retain an unusual genetic purity due to the isolated gene pool on the island. The researchers reported that Icelandic mouse DNA retains "the signature of the ancestral house mouse founders".

The Norse mice, like their Viking hosts, may have arrived in Newfoundland, but left no trace in the mouse gene pool, the research also found. It was possible that Vikings landed on the coast of Canada, but any human settlements there died out.

Genetic records suggest that Norse mice may have colonised Greenland before becoming extinct and then recolonized later, a pattern that reflects the distribution of Norse genes in the human populations of the islands. ®