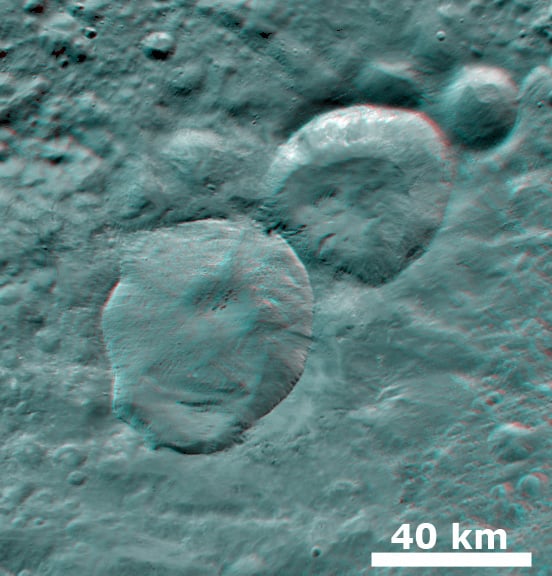 Behold the abominable snowman of the Asteroid Belt.

Dawn launched from Earth back in 2007, bound for the Asteroid Belt between Mars and Jupiter. Unlike most spacecraft, Dawn kept firing her engines for most of her four-year journey towards rendezvous with Vesta: this was possible as the probe uses not chemical rockets but an ion engine, which generates only a tiny poke but can do so for very prolonged periods - eventually getting more results out of a given mass of fuel. Copping a helpful gravity assist from Mars in 2009, Dawn arrived alongside Vesta last summer and in four more months will set off again to visit Ceres, the other whopper of the Belt.

Dawn has already produced much excellent imagery of Vesta, but now it seems that the cunning probe may have outdone itself. NASA scientists are particularly interested in new pics which show intriguing areas of light and dark material deposited on the mighty asteroid's surface. According to a statement issued yesterday by the space agency:

While scientists had seen some brightness variations in previous images of Vesta from NASA's Hubble Space Telescope, Dawn scientists also did not expect such a wide variety of distinct dark deposits across its surface. The dark materials on Vesta can appear dark gray, brown and red. They sometimes appear as small, well-defined deposits around impact craters. They also can appear as larger regional deposits, like those surrounding the impact craters scientists have nicknamed the "snowman."

It seems that Vesta is probably somewhat chocolate-chip in its makeup, with the smaller asteroids crashing into it liable to hurl material of different sorts all around when they hit. The NASA brainboxes poring over the pics also consider that different impact speeds can cause different processes, with particularly punchy prangs sometimes causing Vesta's stuff to actually melt rather than merely fling itself about.

"Melting events like these were suspected, but never before seen on an asteroid," comments Brett Denevi of Johns Hopkins.

The revelations of the chocolatey, possibly melted crater snowmen of the asteroid belt are even now being discussed among space boffins at the ongoing Lunar and Planetary Science Conference in Texas.

Dawn will fire up her ion engine again in July and set off across the asteroid belt. The probe is expected to reach Ceres in February of 2015. NASA offers a handy Dawn tracker page here, and much more besides for lovers of ion-engine asteroid-belt-prowling techno-spiffery. ®