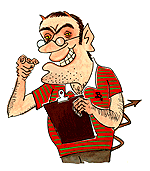 You know, sometimes I wish someone just had the balls to say they want a new iPad cos it looks cool. That they have no clue of what the f$*# they’d use it for, but their kids think they’re great and they can’t be stuffed forking out the money themselves for one so they figure the company should just get one and save them the expense.

But no. Instead the Boss'll read up on the latest gadget, then drop hints about how his laptop/cellphone/PDA/kindle/tablet/home-machine/desktop-machine/space-age-watch (all paid for by the company) doesn’t have some particular function – and wouldn’t it be good if there was "something" that would coordinate your tie colour with the company’s current stock price (Half-Tea for going down, British Racing Green for holding steady and Royal Blue for on the rise) as well as giving recommendations about how many layers (and what type) of clothes one should be wearing.

On and bloody on, until at last some keen-and-green geek on the helldesk will say: “You know I think there’s an iPad app that does that!” and the show begins. Before you know it, the Boss is rabbiting on about how he can’t possibly meet anyone anymore because his tie’s always wrong and before you bloody know it half the other department managers also have a tie-selection problem. Of course you point out that we could write an app that would send him a text message if he liked, but his iPad will have images of ties in case he needs to pick one up on the way to a meeting...

Then some fuckwit in HR will produce about 10 bloody graphs from some hitherto unknown research company "proving": a) Companies with proactive tie selection tend to do better fiscally b) Tie selection has a 99 per cent chance of engendering a favourable response from first-meeting engagements (failing to mention that the 1 per cent unfavourable time was when the tie concerned was the bright pink penis tie – always a favourite at the company family picnics.)

Of course no one ever checks this research out to find that the ‘rigorous’ study was undertaken by a rat-eating madman who also publishes horoscopes based on turd divination.

And then there’s the cost. The budget for the company’s 50-odd retail-priced iPads has to come from somewhere... and because everyone from the Boss up feels it’s crucial IT material and so shouldn’t come out of the department’s expense account – and since the Corporate Wasting-Money-on-Pointless-Shit account doesn’t exist – they just raid the IT Budget instead.

Even this wouldn’t matter if I didn’t know, deep down in my heart of hearts, that I’m going to find half of these devices with about quarter-of-an-hour's worth of use, stuffed into the back of a cupboard with a dead battery three years from now.

I’ve seen it happen many times. Some crusty from upper management retires, steps in front of a bus (or is helped in front of a bus by a friendly IT professional) and then suddenly a box full of IT detritus turns up in Mission Control in case we "want it for something".

And before I even open the box, I PREDICT I WILL FIND:

And, only three years from now, there’s going to be an iPad in there as well. An iPad and an external Blu-ray drive for reading extra capacity media that no one ever sent him.

"So anyway, about this iPad3," the Boss says, walking into Mission Control looking confused.

"I think the screen's broken."

"No the battery will be flat," the PFY proffers.

"Do we have any spares?"

"No, we ordered as many as we needed."

"Well I'll need a new one quite quickly - I've got some meetings tomorrow."

"Okay," I say. "We don't have any here anymore so you'll have to go with the PFY to a retail outlet."

"Can't you just get one delivered?"

"We could, but then it won't be here today. If you need it today you'll need to go to a retail store."

"I suppose I can do that, but how far away is it?" he asks, priming himself for a walk.

"Oh, only a mile or two." the PFY says, noting the Boss's unhappy expression "But tell you what – why don't we take the bus..."