Hardware sites are abuzz with news that Intel is preparing a 22nm Atom chip with a state-of-the-art integrated graphics core on board.

The CPU is codenamed Valley View and it'll be part of a platform called Balboa Pier, slides that have leaked out of kit maker Advantech reveal. 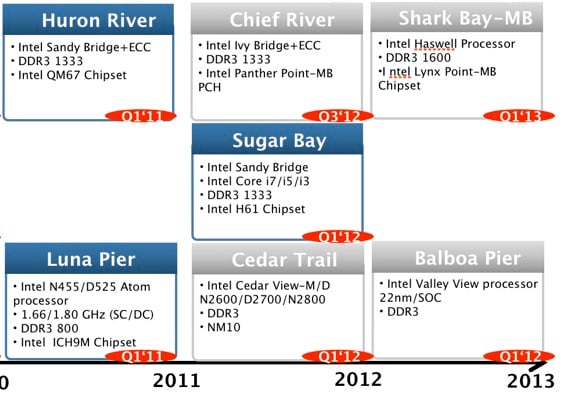 Separately, a fellow named Jesse Barnes, said to be in Intel employee, has been telling open source GUI developers that "Valley View is a Cedar View-like chip but with an Ivy Bridge graphics core", a forum poster at Phoronix spotted.

A netbook with a decent graphics capability at last? The notion is tickling the fancies of hardware geeks across the net.

Such a shame then that, being a netbook chip, it'll be used to drive a 1024 x 600 screen running Windows 8 Starter Edition. And it's likely to debut at a time, late 2012, when the netbook market will have slumped as punters opt instead for tablets.

Traditionally, Intel's netbook chips have sat well back, from a performance and capability perspective, from its notebook processors. If indeed Valley View has an Ivy Bridge graphics core, it seems Intel is bringing Atom more up to date, presumably in a bid to revive the netbook market by making them a little less like last year's laptops. ®