Freedom is more than just a word

Open ... and Shut For developers looking to avoid the Dementor's Kiss of Apple's all-consuming iOS ecosystem, Google has long played the knight in shining open-source armour. Indeed, latest data from IDC and Appcelerator suggest developers are still betting big on Google, expecting its broad range of social products to mint them money. But given Google's track record in social, is this faith misplaced?

Google, after all, has hardly set the world alight with social. Wave and Buzz were resounding duds, and Google+, despite notching impressive-sounding growth numbers, can barely muster 3.3 minutes of users' time per month, according to ComScore. And that number keeps falling each month as users log into Google+ and discover themselves alone.

So why are 39 per cent of Appcelerator's developers (Warning: PDF, registration required) saying they believe Google's network effects of social products will trump Facebook's social graph (and 900 million users)?

It wouldn't seem that this is a big vote of confidence in Google so much as it's a testament to how hard it is to implement Facebook's social graph, which most developers use as a way to broadcast updates to Facebook contacts. In the survey, Google gets credit for easier APIs, among other things. But does this just mean that Google has provided a painless way to fail as its social products fail?

And if developers are so hot to trot for Google then why is interest in Android waning? 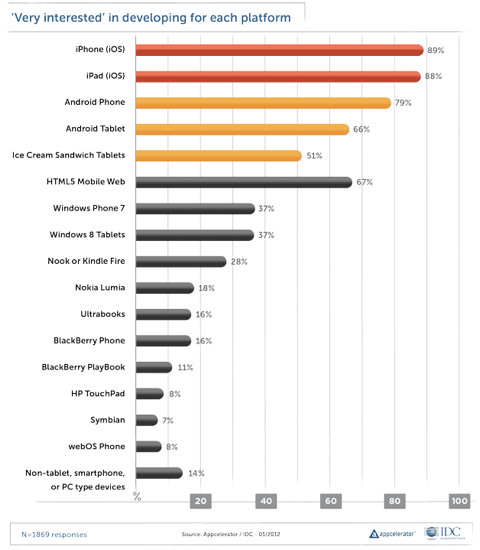 While these numbers are still high, they reflect a consistent erosion of Android interest. Android phones have huge market share, yet developer interest in Android phones dropped 4.7 per cent, while Android tablets, which have yet to make the slightest ripple against the iPad, dropped 2.2 per cent. According to Appcelerator, interest in Android is flagging because the hardware and software profiles for it are so fragmented, as The Register reports.

Developers don't want to be locked into Apple, which is why Google, limping social strategy and fragmented Android and all, remains a solid option. But Google is going to have to figure out who, exactly, it is, and why developers should care. It has billed itself as the open alternative to Apple's and Facebook's closed ways, but it needs to be more than open. It also needs to be good, and its history of product failures is worrisome.

There's no doubt as to Google's ambition. The company has been throwing itself into everything from flight search to payments. But adoption for these two services, and many others, has been painfully slow. There's more on Google Flight Search and Wallet here and here, respectively.

In sum, instead of putting faith in Google's broad portfolio of services – social or otherwise – perhaps developers would be wiser to urge Google to focus on a narrower set of clearly defined, easily deployed services. You know, kind of like what Apple has done. ®