An Arizona aircraft museum reckons it has taken the record for the launch of the biggest ever paper plane: a 45ft (13.7m) long monster which glided to Earth last week from a height of 2,703ft (824m).

Pima Air & Space Museum's hefty 800lb (363kg) Arturo's Desert Eagle needed a helicopter to haul its 24ft (7.3m) wingspan off the ground, but video of the release indicates it really did fly at up to 98mph (158km/h), even if footage of what we imagine was a lively landing isn't yet available.

The aircraft was named in honour of Tucson lad Arturo Valderamo, 12, (pictured below with the Desert Eagle), who won a competition organised by the museum, challenging six-to-14-year-olds to fold and fly a paper plane as far as possible. 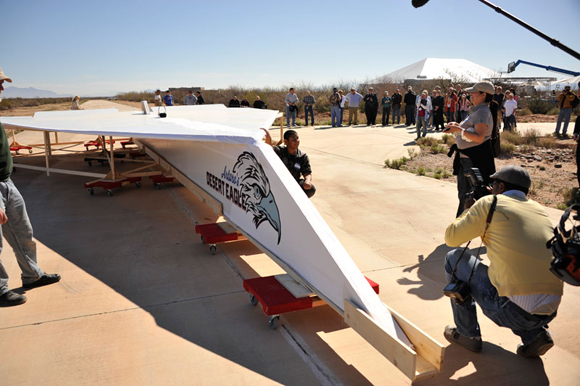 Pima Air & Space Museum executive director Yvonne Morris said of the historic launch: "The arresting visual of the paper airplane in flight rekindled the childhood creativity in all of us." ®

Arturo's Desert Eagle was constructed from "paper-based graphic board" Falconboard, which is made up of "an engineered paper core and water-based adhesives". Disappointingly, the aircraft's structure appears to contain no paper straws whatsoever.

Buddy, can you spare a time?

Look! Up in the sky! It's letters on a plane read with a 250MP camera

Invented before the Galaxy Note 7 went down in flames, the case detects heat and then sprays fire-suppressing gas

'My REPLACEMENT Samsung Galaxy Note 7 blew up on plane'

Flammable Sammy could bring about another recall