Pic Brazilian cops have cuffed two members of the so-called "gang of blondes" - a pack of she-devils who allegedly carried out up to 50 express kidnappings in Sao Paulo between 2011 and 2012.

The group - led by Wagner de Oliveira Gonçalves and his wife Monique Awoki Casiota - are accused of targeting visibly affluent female victims in the car parks of shopping centres and supermarkets. Gonçalves and an accomplice would grab their mark, force her into her car and relieve her of credit and bank cards, police said.

Their associates would then cooly max out the credit cards and withdraw cash from the victim's bank account while she was driven around in her own car, the cops allege adding that the mark would later be dumped back where she'd been kidnapped.

According to this report, the gang members are well educated and speak foreign languages. Police believe they are also experienced criminals, having specialised in raiding condominiums before moving on to express kidnappings.

Gonçalves and his wife, the group's only brunette, liked to refer to themselves as "Bonnie and Clyde", according to investigators. Police named their five blonde partners in crime as sisters Carina and Vanessa Geremias Vendramini, Franciely Aparecida P. dos Santos, Priscilla Amaral and Silmara Lan. 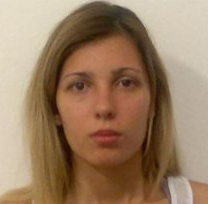 Carina Geremias Vendramini, 25, (pictured) was the first of the gang to be cuffed, on 9 March. Vendramini, who has a two-year-old child, previously worked in telemarketing before turning to crime. She admitted involvement in the kidnappings and was identified by three victims.