AMD plots an end run round Intel with SeaMicro's 'Freedom'

Can clouds and virt move the battle off the chip?

Maybe, just maybe, you externalize and virtualize these things that Intel is cramming onto one chip

So what is the number two server processor chip maker to do? Try harder, and change the conditions of the test. If you have a process lag, you stop trying to cram everything onto the chip and maybe, just maybe, you externalize and virtualize these things that Intel is cramming onto one chip. That way, you can use whatever node you are at process-wise to make the CPUs or APUs and make that processor-agnostic Freedom interconnect and its FPGA software what amounts to a combined server chipset and interconnect. You do two big chips of roughly equivalent size to Intel's two chips of wildly divergent size. (The Xeon is big, the chipset is getting smaller and smaller.) As long as in the aggregate system makers can build a lower-cost, high-performing, better-integrated, power-sipping system out of the components, they won't much care how big the respective chips from Intel and AMD are.

The meteoric rise of SeaMicro, which has been growing faster than many infrastructure startups from the dot-com era did and which makes it well worth the $334m in cash that AMD forked over, demonstrates this – provided AMD uses the technology intelligently and makes no promises it cannot keep. 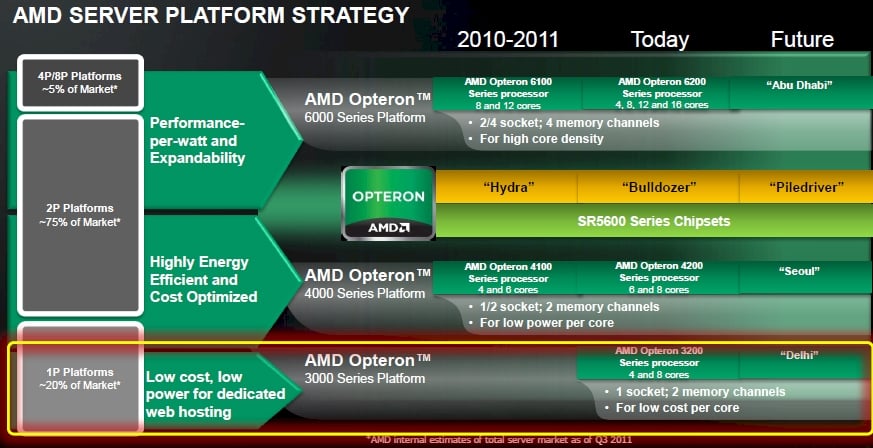 For now, the big problem that AMD faces is getting its own processors working inside of the SM10000 machines. The most obvious processor for AMD to park on a SeaMicro system card is the new Opteron 3200, launched last week. This chip is aimed precisely at the same microserver customers that Intel is chasing with the Xeon E3-1200 processors. With prices ranging from $99 to $229 for variants with four or eight cores, AMD can make a credible argument in terms of performance and price/performance compared to the Xeon E3s with two or four cores and slightly higher prices. The Opteron 3200s plug into the AM3+ socket and don't have as many HyperTransport links or as much bandwidth on the point-to-point interconnects as other Opteron 4200 and 6200 processors: so maybe AMD will go with the Opteron 4200s in the SM10000s when it delivers its own processors in server nodes sometime in the second half of the year. Even big fat Opteron 6200 nodes are not impossible, since you could - if you wanted - use these 16-core behemoths in a single-socket server node. (Super Micro sells such a board.)

Michael Detwiler, product marketing manager at AMD, was not being coy with El Reg when he would not disclose what Opteron processors AMD would eventually slide into the SeaMicro chassis. "What we're going to do is talk to customers and bring to market what makes sense for them."

It stands to reason that there will therefore be more than one option, just as SeaMicro has used a variety of Intel chips thus far in its machines. And the reason is that no one single node is going to appease the cloudy server buyers that AMD is trying to target with both the Opteron 3200 and 4200 processors and now the SeaMicro interconnect.

It would be foolish to think that AMD is only thinking about cloudy servers as it ponders the possibilities of the SeaMicro acquisition. For one thing, the Freedom interconnect can, in theory, scale to thousands of server nodes and if you plunked an Opteron 6200 processor on a system board and put a FireStream GPU next to it on the board, you could make a very powerful ceepie-geepie server node that, with the 3D torus interconnect, would make a pretty respectable supercomputer by any current definition of the thing.

This is particularly important since Cray has made it pretty clear that its next-generation "Cascade" systems and "Aries" interconnect will not be reliant on AMD's Opteron processors and HyperTransport point-to-point interconnect between the Opterons and the Aries chips (which also implement a torus). With AMD essentially losing its biggest OEM partner in the HPC space, AMD is very likely going to help other HPC aspirants go after Cray with the Freedom interconnect and cheap Opteron processors. That's what El Reg would do in this situation.

The SeaMicro ASICs could also be used as out-of-band appliance for virtualizing I/O for infrastructure aimed at supporting more enterprise-grade server virtualization workloads, which are distinct from cloudy workloads in that their resilience is in the virtualization layer, not embodied in the software stack itself.

Cloud, virtualization, and HPC are the growth markets, and it stands to reason that AMD will take all of the components of the SeaMicro system and rejig them so they can be sold as components that AMD's server OEM customers can use to build their own systems.

For more general purpose workloads, AMD could even go so far as to create fatter SMP nodes that span multiple server boards (much as Sun Microsystems did with its very clever uniboard designs for Sparc and Opteron systems) and maybe even implement the chipset in software atop the Freedom interconnect. Imagine what would happen, for instance, if AMD snapped up ScaleMP and created a software-based chipset that lived in the SeaMicro ASIC and that could create virtual SMPs in a chassis or across enclosures on the fly.

The possibilities are not endless, but they are intriguing. ®