Sky boffins: The Moon is not Earth's only natural satellite

'Minimoons' drop by, have a pint, overstay

The Moon is not alone in its role as the Earth's natural satellite, although its companions are tiny fellows who usually don't stay long.

"At any given time there is at least one one-meter-diameter object orbiting the Earth," three astronomers write in the abstract of their article, "The population of natural Earth satellites", published in the March issue of the journal Icarus. "The average satellite makes about 3 revolutions around the Earth in 9 months."

According to the article's authors – Mikael Granvik of the University of Helsinki, Jeremie Vaubaillon of the Paris Observatory, and Robert Jedicke of the University of Hawaii at Manoa – the Earth's gravitational field regularly captures near-Earth objects (NEOs), which zip around terra firma for a bit, and are then flung back off into space to join their bretheren in heliocentric orbits.

The astronomers ran a computer simulation of 10 million asteroids passing the Earth, then tracked the trajectories of the 18,000 objects captured by Earth's gravity.

"This was one of the largest and longest computations I've ever done," said Vaubaillon in an announcement of the team's work. "If you were to try to do this on your home computer, it would take about six years." Luckily, Vaubaillon was able to run his simulation on the Jade supercomputer at the Centre Informatique National de l'Enseignement Supérieur (CINES) in Montpellier, France. 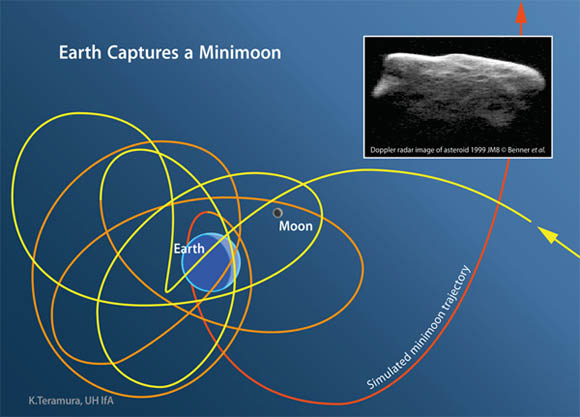 A tiny minimoon's path is nowhere near as stately as that of our 2,000-mile-diameter maxi-Moon (click to enlarge)

The simulation showed that NEOs are regularly trapped by the Earth's gravity, and that their orbital paths are highly distorted by the interaction of the gravitational forces exerted by the Earth, the Moon, and the Sun.

The irregular orbits of the NEOs – transformed into near-Earth satellites (NESs) or "minimoons" – sometime loop between the Earth and the Moon, and sometimes ourside them both. Interestingly, the team discovered that the Earth has a "small preference" for capturing minimoons in January and July.

The brief visitors – also known as temporarily-captured orbiters (TCOs) – can make as few as one orbit of the Earth or can hang around for decades, though the team says that an average visit lasts for about nine months. Some can even drop in for a visit, although the team calculates that only about 0.1 per cent of TCOs become meteorites.

Aside from possibly detecting an impending minimoon strike, the team notes that there are other benefits to knowing where such small visitors are orbiting. "Minimoons are scientifically extremely interesting," said Jedicke. "A minimoon could someday be brought back to Earth, giving us a low-cost way to examine a sample of material that has not changed much since the beginning of our solar system over 4.6 billion years ago." ®