Object storage is based on the idea of storing non-block-based data as objects whose address and integrity in the storage space is based on mathematical hash table processing of the binary contents. There is no need for a file/folder system which object storage suppliers say can be slow and inefficient when storing billions of files. However, as ESG notes: "The disadvantage of object storage in the past has been performance, as data retrieval is generally considered slower than with a file system." 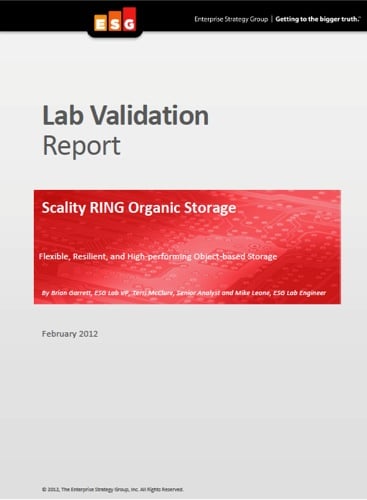 Scality's Ring is a scalable object storage system composed of X86-based nodes storing data in a self-healing way, and logically organised in a ring. An app in a server requests an object read access (get) or writes an object (put). In the get case, if the object is not on on the request-receiving node, only one hop across a 10-node ring will be needed to find it. This rises to two hops for an up-to-100-node ring, and three hops for Rings up to 1,000 nodes in size.

Its report looked at manageability of the Ring and its ability to recover from a lost hardware component, such as a node, as well looking at actual performance. We only examine the performance testing here.

First, ESG looked at object access, both gets and puts. A 3-server ring with 36 logical nodes delivered 26,274 put objects/sec and 41,573 get objects/sec.

Regarding puts, ESG states: "26,274 objects per second from a three node system is an excellent result for an object-based storage solution and a very good result compared to the I/O per second performance of industry leading block-based dual controller disk arrays."

That sounds as if it is saying that the Ring is faster than a traditional SAN array but it doesn't actually say it. Also ESG only tested up to six server nodes and so we don't know how a 100-node or 500-node Ring would perform. 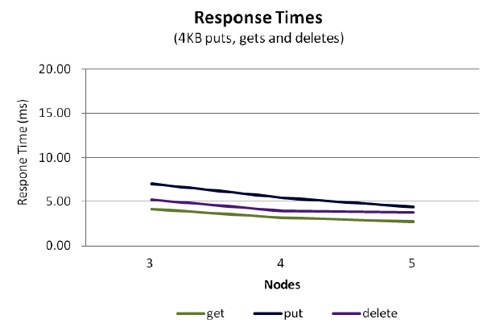 ESG looked at response time and its results are charted above, showing that a 3-node Ring needed less than 5ms for an object get, put or delete: "ESG Lab confirmed response times of no more than 7.05ms for gets, puts, and deletes — 10X the performance of traditional architectures — as well as increasing aggregate performance as nodes are added to the RING."

It said: "The excellent response times of a Scality Ring are comparable with a traditional block-based disk array and considerably faster than [other] object-based storage systems that ESG lab has tested."