Rise of the 'droids

Windows might be on the rise in the world of embedded systems, but if IDC's prognostications are right, then Windows is about to get its kernel handed to it with the rise of Android on what the market researcher dubs "smart connected devices."

By IDC's reckoning, makers of PCs, tablets, and smartphones shipped some 916 million units of machinery in 2012, raking in an astounding $489bn in moolah.

"Whether it's consumers looking for a phone that can tap into several robust 'app' ecosystems, businesses looking at deploying tablet devices into their environments, or educational institutions working to update their school's computer labs, smart, connected, compute-capable devices are playing an increasingly important role in nearly every individual's life," Bob O'Donnell, vice president of clients and displays at IDC, said in a statement that also had this pretty picture: 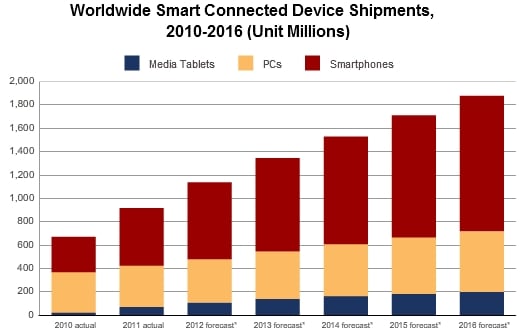 Shipments of PCs, tablets, and smartphones over time (Source IDC, click to enlarge)

El Reg suspects that more and more of us on planet Earth have all three types of devices. (I know that I do, and in fact, I have a workstation for the office, a netbook for the road, an iPad for amusement and browsing, and a Droid for a phone, a map, and browsing when I am really bored.)

Add all these devices up, and IDC reckons that the pile of shiny new gear shipped out to consumers and businesses will be 1.1 billion units tall in 2012 and will be 1.84 billion units tall by 2016 – twice the current ship rate and nearly three times the rate set in 2010.

The Asia/Pacific countries, which are subsidizing the 3G smartphone market (particularly China) will drive smartphone growth over the next five years. While the PC market will continue to grow, the adoption of tablets running iOS and Android will eat into the share that Windows commands on all of these smart connected devices, according to IDC – despite Microsoft's efforts to get Windows 8 running on tablets and PCs.

IDC believes that Windows will see its share of the devices shipped across these three categories of machines drop from 35.9 per cent (or about 329 million devices) in 2011 to 25.1 per cent in 2016 (or about 462 million machines). ARM devices running Android Linux, on the other hand, will grow from 29.4 per cent of the smart connected device pile (or 269 million machines) to a 31.1 per cent share by 2016 (572 million devices).

Those ARM-Android machines will be the largest class of machines shipping in 2016, at least by number. Tablets and smartphones running Apple's iOS will more than double from just under 134 million devices in 2011 (14.6 per cent of the machines sold) to 318 million machines (17.3 per cent of the pile) by 2016.

"Android's growth is tied directly to the propagation of lower-priced devices," said Tom Mainelli, research director of mobile connected devices at IDC, in the same statement. "So, while we expect dozens of hardware vendors to own some share in the Android market, many will find profitability difficult to sustain. Similarly, we expect a large percentage of application developers to continue to focus their efforts on iOS, despite the platform's smaller overall market share, because iOS end users have proven more willing to pay for high-quality apps."

Especially if they let their kids have access to their tablets. ®