Who killed ITV Digital? Rupert Murdoch - but not the way you think

Comment After 25 years of watching the Murdoch TV empire unfold, the battle plan to beat him should be fairly obvious. You buy the best content - the most popular sport and movies - and raise lots of capital, and make watching it easy. Then you dig in for a very long fight.

In other words, this is the entertainment-business-as-usual. Wannabe telly and radio empires have failed because they bought the wrong stuff, were inconvenient to use or because they were under-capitalised in the long run - and typically it's a mixture of all three. Entertainment isn't an essential utility. It's a discretionary purchase for households, and the market doesn't tolerate inconvenience or rubbish for long.

But when the tale involves Rupert Murdoch, people will always look for diabolical reasons for his success. The myth demands it. A fascinating BBC Panorama researched by Guardian reporter David Leigh may give supporters of this view plenty of ammunition. It was enthralling TV about the TV biz, and must have been an eye-opening for anyone not familiar with the decade-old telly crypto saga. But for those of us familiar with the details and the context, the smoking gun just isn't there. Murdoch's telly rivals would have gone down even if nobody had ever watched a single one of their programmes for free.

The story begins with grand plans to bring multichannel digital TV to the UK in the 1990s. Cable was a natural delivery system for this, but for everyone else, digital multichannel telly was a dauntingly expensive proposition.

At the time, BSkyB's crufty analogue satellite service couldn't offer the choice, and didn't have the capacity to deliver it. Sky was also saddled with huge debts. So terrestrial-analogue big boys Carlton and Granada hooked up with Sky to form British Digital Broadcasting (BDB) in January 1997, intended to be a multichannel rival to the cable operators.

But, in possibly the single most important decision a media regulator has ever taken, the (then) Monopolies and Mergers Commission scotched this consortium. Carlton and Granada went alone with BDB, while Sky was obliged to become a rival. Sky had to renegotiate its supply chain and delivery contracts to rush its own multichannel digital satellite service to market. 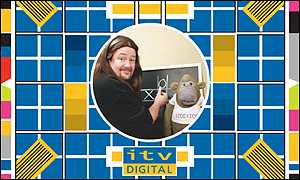 BDB's ONdigital terrestrial service would be beamed into households via £199 boxes attached to ordinary UHF antennae - like Freeview today - and the alliance was confident that snobbishness and suspicion of Sky would assure its success. [Our US readers may be unaware that large sections of the UK middle classes - to some degree even today - tend to regard a satellite dish as a shameful badge of the shiftless sofa-potato junkfood-scoffing eyes-glazed proletariat. -Ed]

So it didn't look promising for Sky. But the satellite broadcaster had a beachhead that it had held onto for over a decade: some 3.45 million subscribers in the UK, against cable's 3 million, with penetration into 14 per cent of UK households. Sky thus went head-to-head with ONdigital.

A year after launch the market was voting for Sky's new digital service in significant numbers: it was taking four viewers for every one ONdigital was signing up. ONdigital limped on until 2001 when it rebranded as ITV Digital and expired a year later.

All three multichannel digital rivals marketed their own set-top boxes, using conditional access systems based on smart cards. By the mid-1990s these smart cards had been hacked, and counterfeits giving free unauthorised access were in widespread circulation. Where there was a box, there was a man in a pub selling a counterfeit card. Sky used a system called Videoguard by an Israeli company called NDS that it had established in 1988. (NDS was sold to Cisco for $5bn earlier this month.) ONdigital had originally agreed to use NDS's system, but instead opted for SECA's MediaGuard, developed and owned by the French cable operator Canal+.

But there were alleged links between NDS and the web's underbelly. NDS has been the subject of several lawsuits from pay TV broadcasters around the world claiming that News International, via NDS, abetted piracy. Lawsuits have been brought by Canal+, Telepiu, DirectTV, Sogecable, MEASAT and EchoStar in the past ten years. Only one reached a verdict, with EchoStar winning nominal damages of $1,500 - somewhat shy of the $1bn it wanted - and EchoStar had to pay legal costs.

In the first of these lawsuits, in 2002, Canal+ detailed the allegations against NDS - that NDS's security chief had made payments to the owner of Thoic.com, The House of Ill Compute, run by Lee Gibling. Thoic users distributed encryption codes which allowed counterfeit access cards to be created, giving unpaid access to ONdigital. ONdigital claimed it was losing £100m a year to piracy - a considerable sum. Gibling disappeared into thin air and Canal+ dropped its case the following year.

NDS' defence was that Thoic was an intelligence-gathering "honeypot" operation - such things are routine practice in the tech-security industry - and it never sanctioned the distribution of rival encryption codes onto Thoic nor condoned such actions. Gibling was paid purely as an informant, says NDS. After years of silence - during which he was paid by News International - Gibling finally talked to Panorama.

"It was NDS, it was their baby and it started to become more their baby as they fashioned it to their own design,” Gibling claimed.

But the most damaging allegation in the Panorama was that the published ROM details were traced back to NDS' own reverse-engineering lab in Haifa, Israel. NDS denies this. Gibling also alleges that the operational keys to the ONdigital smart card were supplied by Ray Adams, NDS security chief.

Adams has denied providing the keys, or any software that would - and indeed has done so under lie detector. He is a former senior officer in the Metropolitan Police, well known for his involvement in several high profile cases during the 1980s and as one-time commander of the special SO11 intelligence squad (since disbanded, with its tasks taken up by the Counter Terrorism Command).

But numerous lawsuits have failed to establish in court the connection Panorama invited us to make. Reverse engineering was commonplace, and counterfeit smart cards were easy to build and obtain by the time ONdigital launched in 1998.

And frankly, it doesn't matter. When ONdigital aka ITV Digital collapsed in early 2002, the company said there were 100,000 counterfeit smart cards in circulation for its service. It had a subscriber base of 1.3 million, compared to Sky Digital's 5.7 million: so whatever killed ONdigital, it wasn't pirate smartcards.

So then, what did?