Top boffins in France have come up with a radical new take on the "cloaking" and invisible-shed physics breakthroughs of recent years. They have designed a technology which instead of bending microwaves or light can shield an object from heat - or concentrate heat upon it. 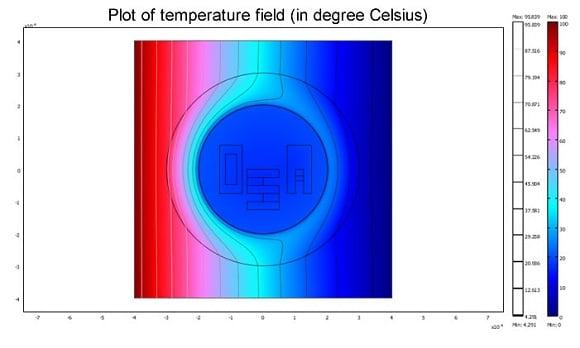 Can't crack their shields! More power to the heat rays!

"Our key goal with this research was to control the way heat diffuses in a manner similar to those that have already been achieved for waves, such as light waves or sound waves," says Sebastien Guenneau, of Aix-Marseille uni and France's Centre National de la Recherche Scientifique (CRNS).

"Heat isn't a wave — it simply diffuses from hot to cold regions," Guenneau adds. "The mathematics and physics at play are much different."

For now designed only in two dimensions, Guenneau and his colleagues' approach involved shaping isotherms - lines showing density of heat flux transferring from point - so as to make heat travel around a given area rather than into it.

“We can design a cloak so that heat diffuses around an invisibility region, which is then protected from heat. Or we can force heat to concentrate in a small volume, which will then heat up very rapidly,” Guenneau says.

The new research will have engineers in many fields salivating, as control of heat is an issue in many forms of technology. <IT angle>Chip designers and other nano- or micro-electronic specialists will be noting Guenneau and his colleagues' work with interest, as heat is one of their main stumbling blocks.</IT angle>

Another field where the French boffinry would be of interest is spacecraft. Heat management in space is a nightmare, as there is no surrounding atmosphere (far less any handy water or anything) into which to dump surplus heat: typically the only way to cool anything is by radiation. This isn't an impossible challenge for the moment, as spacecraft don't generally generate much heat internally (the only exception being when firing rockets, and in a well-designed rocket much of the heat should be carried out in the exhaust gases). Even now, though, spacecraft heat management is a big deal and involves a lot of cumbersome equipment - so the new heat shielding/focusing tech could be a big deal right off. In addition to satellites and the like, it could perhaps be particularly handy in re-entry vehicles.

In future, when space travel has become a serious activity, it could be more important still. Real serious spacecraft able to carry people or viable cargoes on interplanetary voyages will need to generate serious amounts of power on board - far more than solar photovoltaic panels can offer, even if they didn't need to go far from the Sun. They will probably have to use nuclear power or some other method which will produce substantial amounts of waste heat, and stopping that heat from building up and melting the spacecraft will be a difficult challenge indeed. The new heat-director ideas from Guenneau and his colleagues could come in very handy here. (Though presumably inside the craft, as in vacuum heat doesn't diffuse - here it is indeed a wave.)

And for those applications where solar power remains viable, the concentrating applications of the new theory could also be useful.

We would just note, though, that like more conventional wave-bender ideas, this isn't a "cloak", it wouldn't arrive in the form of a fabric but a solid assembly of some sort. In other words it's a thermal shed, not a thermal cloak.

The new research is published here in the learned journal Optics Express. ®