Jeff Bezos, Amazon's adventurous CEO, says his organization has found the F-1 rockets used briefly by Apollo 11 and he wants to salvage them for American museums.

"A year or so ago, I started to wonder, with the right team of undersea pros, could we find and potentially recover the F-1 engines that started mankind's mission to the moon?" he said in a statement. "I'm excited to report that, using state-of-the-art deep sea sonar, the team has found the Apollo 11 engines lying 14,000 feet below the surface, and we're making plans to attempt to raise one or more of them from the ocean floor." 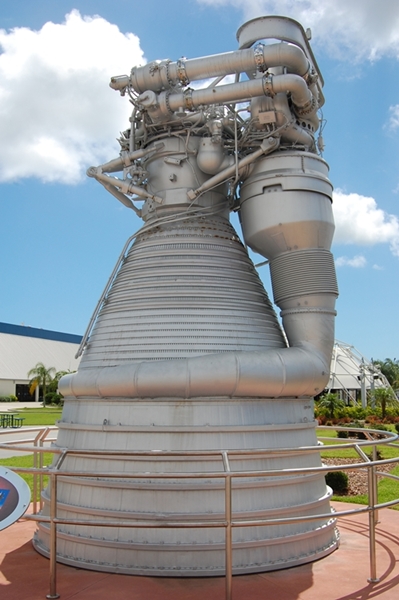 An F-1 rocket on display

The 18.5ft by 12.2ft rocket motors were attached to the S1-C-7 first stage of Apollo 11, boosting it through the first 67 of the 389,645 kilometers the tip of the spacecraft would eventually travel from Earth. Five F-1 motors in all were attached; one centrally fixed rocket with four surrounding it that were gimbaled for maneuverability.

After 165 seconds of burn eight retro rockets fired through the fuel tank's fairings to slow the stage down and, after reaching apogee, it fell into the ocean off the Florida coast. The condition of the rockets is as yet unknown Bezos said, since the 40 ton rocket set would have hit the water at high speed, and has been resting on the seabed surrounded by salt water for over 40 years. 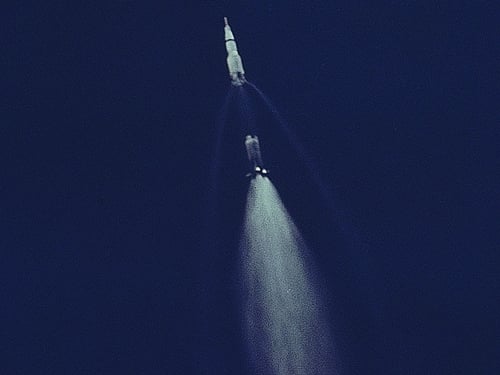 Apollo 11 rockets about to begin a very long, hard drop

While they remain the property of NASA, Bezos is offering to salvage the historic rockets for display to the public, with the Smithsonian Museum his first pick for a new home. If more than one rocket is in a salvageable condition he'd also like one for Museum of Flight in Seattle, which also houses Concorde and the first Boeing 747.

Bezos stressed this would be a privately funded venture, and El Reg is sure he, or his space company Blue Origins, could kick in some cash. Paul Allen would also probably be up for a donation, considering his interests in the space arena, and especially since it might help one of his favorite local museums. The prime space techy Elon Musk might also be interested, if just to check out the competition.

The F-1 motor remains the most powerful rocket ever built, but not for too much longer if Musk has anything to do with it. Musk's company SpaceX plans the first launch of its Falcon Heavy rocket next year, which is a little less powerful than the F-1, but much more economical. Musk predicts the new rocket will bring the price per pound of cargo for orbital deliver below the $1,000 mark, and has his sights on more powerful designs in the future. ®