Big Blue preps 'next gen' machines that manage themselves

IBM is getting ready to launch a new server platform, known internally as the "Next Generation Platform" and also known by that moniker in discussions with business partners that have been briefed over several weeks.

Externally the NGP machine is being called an "expert integrated system", and it will debut in two weeks.

The NGP machine is the first new design to come out of IBM since it merged its Software Group and Systems and Technology Group back in July 2010. There will be some bigwigs at IBM handling the NGP launch, which will take place in a webcast at 1400 Eastern on 11 April: 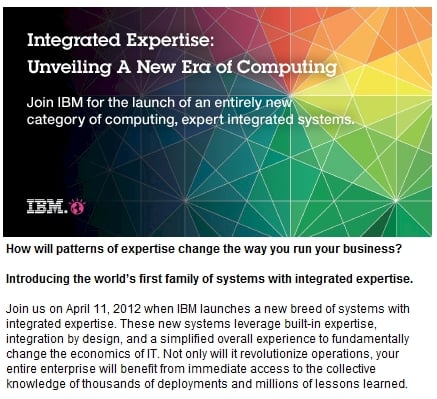 Your humble Reg hack is not sure what IBM means by "a new breed of systems with integrated expertise" that "leverage built-in expertise, integration by design, and a simplified overall experience to fundamentally change the economics of IT". But that is what the promise is for these NGP machines.

What I can tell you is that Bob Picciano, general manager for software sales at Software Group will be participating in the launch, as will Jim Stallings, general manager of global markets for Systems and Technology Group (and the top server exec inside of IBM). David Mitchell, chief technology officer of the Teamcenter PLM software division of German industrial giant Siemens and presumably a beta customer of the NGP systems, will also be at the launch.

"We're all interacting with customers every day, and they are telling us that one of their concerns about information technology is the amount of labour it utilises," explains Steve Mills, general manager of Systems and Software Group at IBM, in this YouTube video preview of the announcement. "It takes a lot of people to understand it, configure systems, set them up, manage them, maintain them, the cost of changing them, and so on. So they always say to us: 'There's got to be a better way.'"

This NGP box is coming out of IBM's Raleigh, North Carolina, facilities and its design is apparently being spearheaded by Steve Hunter, who was named an IBM Fellow last year and who has worked for IBM for 27 years.

Last autumn, Hunter gave a presentation at North Carolina State University, where he is an adjunct professor in computer science, about next-generation systems, basically outing the name of the project, but probably not the name of the final product. 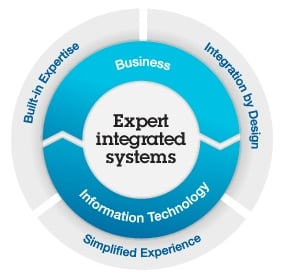 Hunter got his bachelor's degree in electrical engineering and computer science from Auburn University in 1984, and started working at IBM's Networking Division (when it still had one) right after that. He went on to get a master's degree from NC State and then a PhD from Duke University. Hunter started out wiring circuit boards, and then wrote diagnostic code, did circuit design, then got into hardware design and system architecture.

In 1998, Hunter joined IBM's System x server division (it wasn't called that then, of course) and contributed to the EXA chipset design (derived from IBM's acquisition of Sequent Computer) as well as to the InfiniBand switch fabric. He was one of the designers of IBM's BladeCenter server and was in charge of networking for that platform, helped design RAS features into the System x product line, and also led IBM's acquisition of appliance maker DataPower in 2005.

In 2007, Hunter moved from Systems and Technology Group to IBM Research, where he was chief systems architect for next generation systems, and recently he returned to what is now Software and Systems Group to be the strategy lead for the Next Generation Platform.

The word on the street from one source who is familiar with IBM's plans with the NGP system is that it will have x86 and Power server nodes as well as storage nodes and integrated switching - much as the BladeCenter does today.

But the secret sauce in the machine will be the management software, which will apparently make it manage itself to a large degree. Another source said that the machine will be using a variant of the Storwize V7000 storage server software and some Blade Network integrated switches plus IBM's Systems Director Management Console management tool.

There is some rumour that all of these compute and storage nodes will hang off a common bus inside the NGP machine so all main memory, flash memory, and disk storage is available to all nodes. The system will eventually support PowerVM and its Virtual I/O Server variant on Power-based nodes, and VMware's ESXi hypervisor and Red Hat's KVM hypervisor on the x86 nodes.

In essence, this NGP thing is a baby version of the "system of systems" mashup that IBM created with the blade-extended System zEnterprise 196 mainframes and launched in July 2010, when it did its software and systems convergence. But it looks like this time the server nodes are peers, not Power and X86 nodes playing second fiddle to the mainframe.

IBM could add mainframe engines to the NGP platform as well, but thus far El Reg has not heard that this has been done or is in fact the plan. It is clearly a possibility and obviously desirable. ®