A persistent drought and a mild winter has caused a spike in the number of rabid skunks invading the the suburban landscapes of states from up in South Dakota to down in New Mexico.

"Everyone is afraid of skunks because you don't want to get sprayed," South Dakota state epidemiologist Lon Kightlinger told The Wall Steet Journal (paid subscription required). "You add rabies to the mix and it makes them even more undesirable."

We can't argue with that statement. When cute li'l Pepé Le Pew morphs into a murderous marauder, it's an undesirable situation, indeed. And when he's joined by a gang of his frothing fellows, undesirable escalates to downright alarming.

The villain in this nightmare scenario isn't the furry unfortunates themselves, however, but rather the drought and unseasonably warm weather gripping much of the nation's midsection.

The lack of rainfall has been especially dire in southwest Texas and southeast New Mexico, where the US Drought Monitor has raised the level of a vast swath of land to a drought rating one final step above Extreme: Exceptional.

And that exceptional drought is driving rabid skunks into contact with humans. "More skunks seem to have migrated to suburban areas where there is water," Texas Department of State Health Services veterinarian Ernest Oertli told the WSJ. 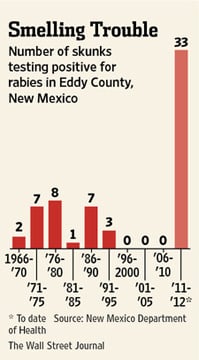 Especially hard hit is Eddy County, New Mexico, home of the town of Carlsbad. "I was in church on Sunday," Carlsbad Police Chief Daniel Fierro said, "and I heard three different people talking about rabies and skunks."

When infected, the skunks are nasty little buggers. So far, their scraps with domesticated animals have resulted in 30 of Eddy County's dogs, cats, and sheep needing to be euthanized. No humans, however, have been infected with the deadly disease, which can kill if not treated immediately. That's no humans so far...

As a Reg reader, you're quite reasonably entitled to ask, "And so, where's the IT angle in this story?" And our sheepish answer must be, "Well, none, actually – we simply wanted to run a story entitled 'Rabid skunks attack US'."