Yes it crashed a lot. It crashed less than its predecessor though, and kept Microsoft on the path to desktop domination. This was Windows 3.1, released on 6 April 1992, nearly two years after Windows 3.0 was pushed out in May 1990.

Minimum system requirements are MS-DOS 3.1 or later, 2MB RAM, and a hard drive with 6MB free. This means a modern PC with, say, 2GB of RAM exceeds the minimum requirements by around 1,000 times.

The improvements in Windows 3.1 were incremental rather than dramatic, though Microsoft claimed there were altogether over 1,000 changes. The user interface is the same as 3.0, but 3.1 supports TrueType scalable fonts, enabling desktop publishing applications to work without Adobe Type Manager. Support for x86 Real mode was removed, multimedia extensions were added, windowed DOS applications supported graphics, and 32-bit disk access in 386 enhanced mode offered faster hard drive performance through bypassing the BIOS. SmartDrive 4.0 disk caching gave 3.1 a further performance boost. 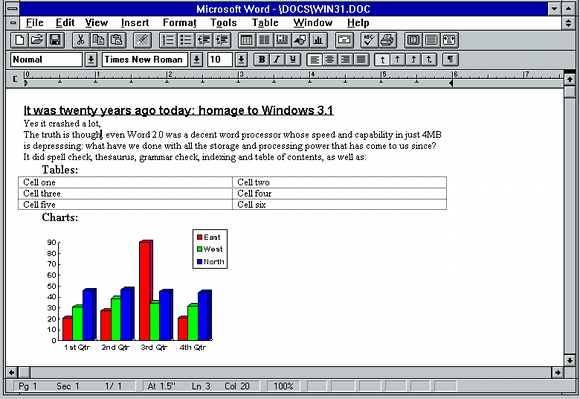 Overall, Windows 3.1 worked substantially better than Windows 3.0, winning over DOS diehards and providing a platform for a ton of compelling applications. It was long-lived, and many did not bother to upgrade until Windows 95 appeared over three years later. Windows NT, released in July 1993, was technically a huge improvement, but heavy system requirements along with compatibility issues deterred upgrades.

Twenty years on, what better time to fire up the code with a trip down I/O lane?

Windows 3.1 is no longer available on Microsoft's download sites MSDN and TechNet, though you can get its later variant – Windows for Workgroups 3.11. Our copy came from some ancient original floppy disks that surprisingly are still readable.

I loaded it into Oracle's Virtual Box emulator, which runs it reasonably well – if you can put up with the mouse jumping around randomly on occasion.

Running Windows 3.1 now is thought-provoking. Some aspects are impressive. The Microsoft Office software of the era – Word 2.0 and Excel 4.0 – is excellent. The speed and capability of Word 2.0 in just 4MB RAM is depressing: what have we done with all the storage and processing power that has come to us since?

I had intended to write this review using Word 2.0 but things didn't quite work out as planned. It proved tricky to prise my words from the VM because the clipboard didn't work properly with the VM host, while writing to the floppy drive proved a challenge. Not a priority for me here.

Word 2.0 does serve to remind you, though, just how this version of Microsoft's signature app is lacking the bloat that afflicts today's Office applications and yet is still a mature product. Word 2.0 comes with spell-check, thesaurus, grammar checking, indexing and tables of contents, rich graphical formatting, paragraph styles, charts, footnotes, fields, macro programming with WordBasic and much more.

Working with Microsoft's old operating system, it was also fun to run up Visual Basic 1.0 – released in 1991 on just three 720K floppy disks. With VB anyone could write a Windows application. Then, as now, it was applications that defined the success of an operating system, and it was obvious that Windows had all the momentum both for internal and shrink-wrap software. 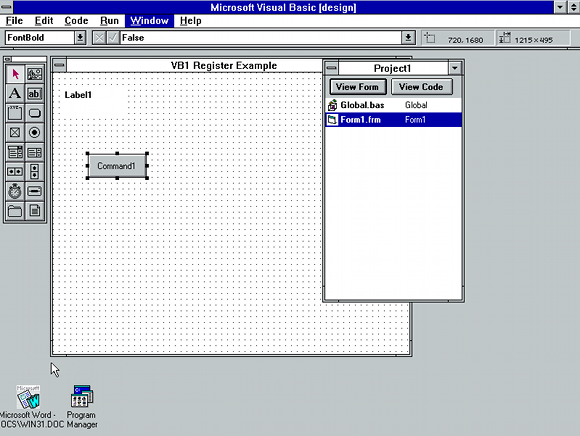 Programming Windows with C or C++ was hard, but the flat memory model and operating system services for printing and graphics solved so many problems for developers that it was worth the effort of struggling with arcane concepts like GDI mapping modes, and the limitations of non-preemptive multitasking, which meant that badly behaved applications could seize up Windows.