Android App of the Week TED - or Technology, Entertainment and Design - is a series of conferences run by a private not-for-profit organisation called the Sapling Foundation. In its own words, it was formed to disseminate "ideas worth spreading".

So what we have here then is a collection of 1200-odd - with more being added each week - video lectures given to a live audience by the intellectual great and good on subjects ranging from why societies to collapse to Zulu art to the 1918 flu pandemic. 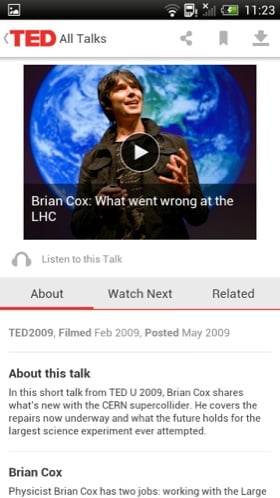 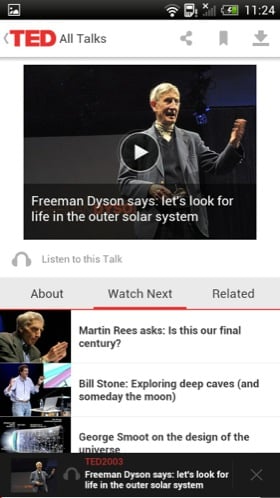 The list of speakers is as broad as the range of subjects with Bill Clinton, Jared Diamond, Al Gore, Robert Ballard, Paddy Ashdown, Richard Dawkins, Bill Gates, and Google co-founders Larry Page and Sergey Brin to name but a few of the many making an appearance.

There's little in the way of political bias, though I’ve no doubt some frothing-at-the-mouth right wing loon would give me an argument about that and start yelling about the liberal intellectual conspiracy. But there’s a reason Al Gore has several talks and George W Bush gets none: Bush is not a mental giant. 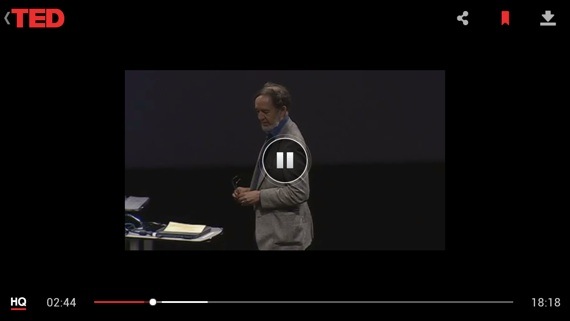 The app itself is has been put together with the same intellectual rigour as the content. With its sparse red, white and black colour scheme it looks good and is very easy to navigate around.

Talks can be streamed as video or audio feeds, or you can download videos to watch later. There’s also very simple bookmark system so you flag talks to come back to and of course you can share what you are watching to your social network. 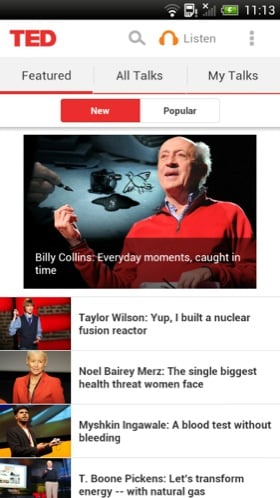 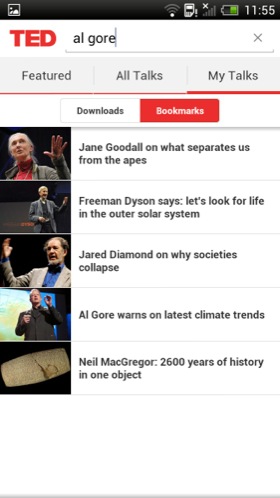 Each talk has a single paragraph summary below it and an equally brief biography of the speaker. You will also see Watch Next and Related tabs below each video. The former takes you to directly related content while the latter lists all the talks on related themes and topics.

As a way of leading yourself down an intellectual road you may not have trod before, or that you didn’t even know existed, it’s all very well laid out without getting too complicated for the casual viewer. 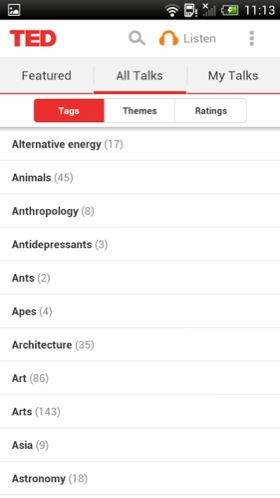 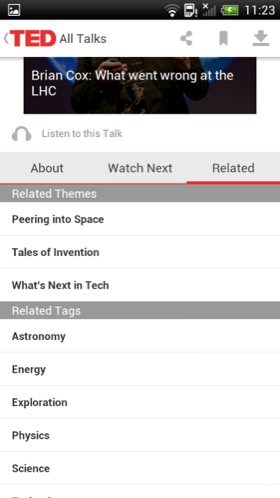 If you can’t find something here to pique your interest then you really need to be more open minded. If you want my personal recommendation for a taste then search for Jared Diamond and take in his talk on why societies collapse.

The TED app is free, carries no advertising, can be stored on your SD card and asks for no permissions other than to access your phone’s storage and internet connection so there’s no reason not to dip your intellectual toe in. ®