Cisco and NetApp are broadening the market for their FlexPod converged server-storage-networking-and-software systems with an entry-level system designed for 500 to 1,000 users.

A FlexPod is an architectural blueprint listing validated components that can be bought and bolted together to provide a system with defined capacity and performance characteristics. FlexPod-defined systems can be bought from more than 500 channel partners around the globe and can scale up to support 100,000 users.

FlexPods will compete with the VMware-EMC-Cisco built Vblocks, which are made up from similarly validated components but delivered as complete systems from VCE. FlexPod users, however, will able to substitute other components for the validated FlexPod components, and include different hypervisors and system and application software should they wish. 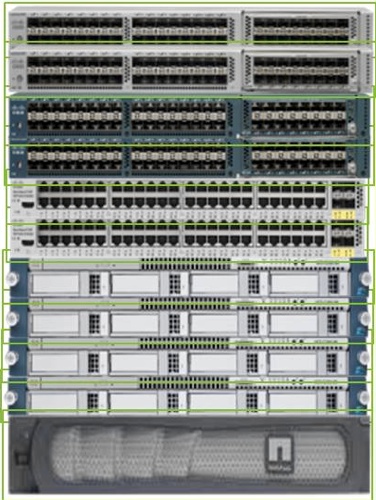 The new and more affordable configuration substitutes a Cisco C-series rackmount server and entry-level FAS2240 storage array. The system has a Cisco UCS 6248 Fabric Interconnect box plus a Nexus 2232 Fabric Extender. It features iSCSI access, including boot support, plus NFS and CIFS access.

There are three validated turnkey management offerings for FlexPods: from CA Technologies, Cloupia and Gale Technologies repectively. Cisco's Intelligent Automation for Cloud (CIAT) has been added to this list. FlexPods can also be managed through an API interface or via VMware's vCenter.

CIAT (warning: PDF) is an integrated stack of management software for automated private cloud application and infrastructure provisioning, workflow orchestration, self-service and service catalogues. It is "designed to enable non-technical users to use a self-service interface and service catalog order and provision predefined solutions such as SQL servers and development software images, without needing to contact the IT organisation directly".

Customers can add additional capacity to their baby FlexPods to scale them up for bigger workloads and/or more users.

Cisco and NetApp claim more than 850 customers have bought FlexPod systems, and that there has been a 400 per cent growth in customer numbers in the past nine months.

It is intriguing that the storage duo are introducing a lower-spec, lower-cost FlexPod at the same time as EMC is introducing what Reg storage desk suspects is a mini-Vblock in the shape of a VSPEX system.

The first Cisco-validated design for an entry-level FlexPod with vSphere 5.0 is expected to be available in May. A Microsoft Hyper-V design should follow soon enough after that. The fact that it comes with Cisco rather than NetApp validation indicates Cisco is in the driving seat here.

Neither NetApp nor Cisco was able or willing to providing any specific or overview pricing indications for the new mini-FlexPod, either absolute or with reference to the existing FlexPods. This is a ridiculous state of affairs for a system that can ship next month. The cost of goods has dropped substantially, yet the companies are not being open in any way about pricing.