Mega-star HD 10180 could have more planets than the Sun

Headline-hogging HD10180, the Sun-like star that fired the imaginations of alien-lovers everywhere back in 2010, may be the biggest planetary system ever detected. 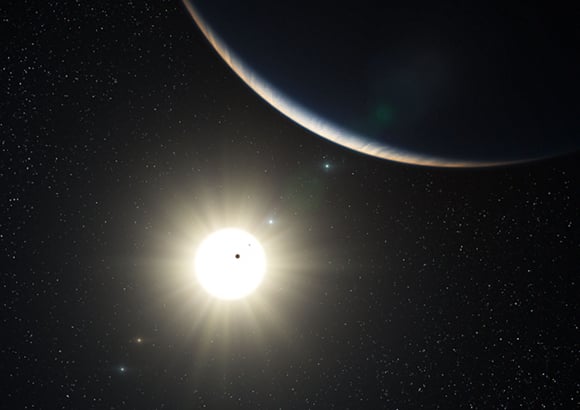 A new study is claiming that there may be nine planets circling the main sequence star, making the system bigger than our own (if you stand on that side of the Pluto debate).

Two years ago, space-boffins using the High Accuracy Radial velocity Planet Searcher (HARPS) reported that there were at least six and maybe even seven planets orbiting HD10180, a star very like our own Sun about 127 light years away.

Those rocks were identified using Doppler shift measurements, a periodic shift in the light from the Sunlike star caused by the planets doing their rounds.

The new study (PDF, 12 pages) has re-examined the data from HARPS using different statistical methodology, finding evidence for three extra planets around HD10180 on top of the five Neptune-sized and one Saturn-sized world found in the first study.

The three new planets, one of which was suggested but couldn't be completely proved by the first analysis, have masses of 1.3, 1.9 and 5.1 times that of Earth, putting two of them in the habitable size category.

Despite the fact that most of the planets are too big and all are in close orbit to HD10180, if the study results hold up, it's still good news for those waiting for our alien overlords because it supports Bode's Law, a rough rule of how far planets should be from their sun.

If Bode's Law applies across the universe, as it does at our solar system and this (relatively) nearby planetary system, the chances for life-bearing planets somewhere out there increase. ®