HotLink, the startup that came out of stealth last year with a kind of über-visor for managing incompatible hypervisors all from the same console, is beefing up its integration with VMware's vCenter management console.

Lynn LeBlanc and Richard Offer, the founders of FastScale Technology, a company that created some very clever software-packaging technologies for minimalist operating systems and software stacks, sold that company in August 2009 to EMC, which passed it over to its virtualization minion VMware soon thereafter.

With nothing else to do, LeBlanc and Offer took a look at the vendor lock-in between hypervisors and their management consoles, and decided to get out some acetylene torches to severe the links with something they are calling SuperVisor.

The idea is simple enough: everyone will want to use different hypervisors just as they have been using a different mix of operating systems and server types for the past several decades. There are historical, economic, cultural, and technical reasons why companies have multiple servers today, and seemingly ancient servers persist in the data centers in the 21st century – and the same will hold true for hypervisors that virtualize servers and underpin clouds.

The problem is that system administrators don't want to learn to use a new tool just because they have multiple hypervisors. They want one pane of glass, and they want only the one they want, whether it is vCenter, XenCenter, Systems Center Virtual Machine Monitor, or RHEV Manager.

The other problem is that all of the vendors who create these virtualization-management consoles do not expose all of their functionality through APIs, so you can't just have vCenter manage a Hyper-V virtual machine.

That's where HotLink comes in. The SuperVisor tool has a clever bit of code that abstracts the metadata describing the hypervisors and virtual machines for x86 servers, and allows them to be natively seen and manipulated by any of the management consoles – particularly the consoles that were not designed to do such an unnatural act. 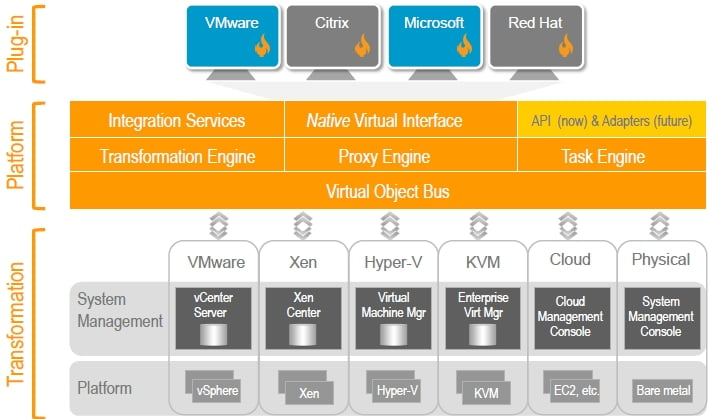 So, in the case of vCenter, which is the first hypervisor management console supported by SuperVisor, vCenter can not only manage virtual machines that are running on Xen, Hyper-V, and KVM hypervisors, it also doesn't know they aren't running on VMware's ESXi hypervisor and are not proper ESXi guests. Eventually, SuperVisor will do this transformation for Systems Center Virtual Machine Manager, RHEV Manager, and XenCenter.

Last year, when HotLink launched, LeBlanc told El Reg that this year it would have a plug-in for Systems Center as well as plug-ins for Amazon's EC2 compute cloud from either vCenter or Systems Center. She said further that HotLink was working on a plug-in for RHEV Manager with Red Hat, and that it was looking at how to integrate with XenCenter as Citrix Systems was re-architecting its virtualization management tool. 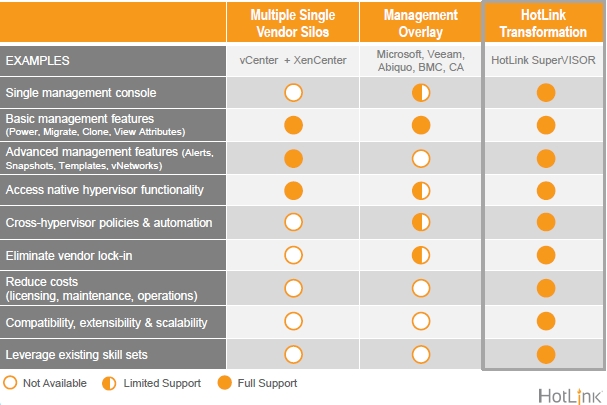 The idea is to stop using multiple tools or to stop using overlays that try to glue the various consoles together. It is far simpler and more elegant to trick each console into doing the work of the other three. Provided that SuperVisor is not too expensive and actually provides all of the functionality they expect, you know that admins want this.

The SuperVisor for VMware 1.0 tool that launched last fall was able to do fine-grained host and VM management, monitoring, network setup, and security setup from vCenter for VMs running on XenServer, Hyper-V, and KVM. The tool could do VM cloning and workload conversions across those VMs, as well as cold and hot migration of VMs. But there were some parts missing.

With SuperVisor for VMware 1.5, announced on Tuesday, system administrators can now create repositories of VM templates created for ESXi, XenServer, Hyper-V, or KVM, and store them in native VMware format (which is in a VMDK file with some metadata slathered on it) rather than having to keep a separate repository for each kind of hypervisor and – worse yet – having to update them all any time you make a change.

That's what you have had to do until now, says LeBlanc, because Hyper-V uses the VHD files and its own metadata, and XenServer has a mix of VHD files and ISOs.

The SuperVisor 1.5 release for vCenter also allows for cross-hypervisor snapshots to be taken from inside of vCenter, and also allows for reverse snapshotting, or hitting the big Undo button when you do something bad to a snapshot. The update also allows for VMware's VMotion live-migration feature to force live migrations on XenServer, Hyper-V, and KVM hypervisors.

Given the popularity of VMware inside the corporate data center, HotLink does not expect companies to abandon the vSphere stack and vCenter just because it is expensive and other solutions cost less. Nor does it expect for companies to just standardize on any one hypervisor.

"Having a single platform to serve every workload in the data center is a little unrealistic," says LeBlanc.

Customers are also looking at their virtualization costs now every bit as much as they looked at their mainframe hardware and software bills two decades ago. And HotLink therefore expects for data centers that have become more sophisticated about server virtualization to use VMware ESXi for mission critical workloads, and Hyper-V – and perhaps KVM or Xen – for non-critical workloads where the cost of the VMware stack is prohibitive.

SuperVisor for VMware is now sold with an annual subscription license (new with the 1.5 release) as well as the perpetual license it was launched with last year. A starter kit with the SuperVisor server and the ability to manage five physical hosts running KVM, Hyper-V, or XenServer costs $25,000, while the annual subscription costs $6,000 for the same number of hosts.

Obviously, HotLink can't charge you for the ESXi hosts you manage from inside vCenter – VMware already charges you enough for that. ®