A new Act just signed into law by President Obama that relaxes accountability requirements for internet startups has been called a 'licence for fraud'. The Jumpstart Our Business Startups Act (JOBS) Act (HR.3606) is backed by AOL co-founder Steve Case (himself no stranger to fraud allegations) and other titans of Silicon Valley – and supported by Google – all of whom argue that the new law is vital for job creation.

Jumpstart waives the requirement for small companies to be audited under Sarbanes-Oxley regulations for five years. Sarbanes-Oxley was brought in to protect investors after the tech bubble a decade ago saw internet stocks hyped by the banks, which were selling them to the public. Privately the banks thought the stocks were worthless, and equity analysts including Merrill Lynch's Henry Blodget – now reborn as a web publisher and Twitter star – received a lifetime ban by the regulator SEC.

"The era of low standards and false profits is over," said President George W Bush when he signed Sarbanes-Oxley into law, "no boardroom in America is above or beyond the law."

Recently Groupon had to revise its prospectus several times after falling foul of SEC disclosure requirements. Now imagine a world where those obligations don't exist.

Supporters of the Jumpstart Act, including Case, who served on Obama's jobs committee, say that the removal of the disclosure obligations and auditing requirements will help stimulate 'crowd-funding'. Critics argue that 'crowd-funding' simply brings the values of penny stock speculation to Main Street. The penny stock market is a notorious "petri dish of fraud", because the information that investors need to make an informed judgment about their real value is incomplete or non-existent. The stocks can be hyped by celebrities, or aggressively sold by boilerroom operations which can make a killing. The investor loses out.

The similarities between crowd-funded internet startups and penny stocks can be judged by you, dear reader. Compare Investopedia's warnings for investors thinking 'bout penny stocks, with the warning for investors issued by one of many new crowd-funding hopefuls, Seedrs, in Silicon Roundabout. 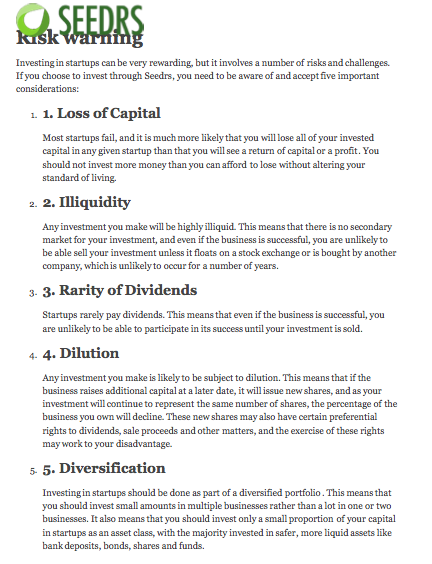 What crowd-funding really does is take the "find a bigger idiot" principle and add internet-scale economics to it. You no longer needed to know just a few, big idiots – as long as you can find a larger number of smaller idiots, you could make it up with volume.

"This is like formally eliminating steroid testing for the first five years of a baseball player's career," says Matt Tiabbi, the writer who gave us the memorable image of Goldman Sachs as a "giant vampire squid wrapped around the face of humanity". Taibbi discusses JOBS Act here.

"Get ready for an avalanche of shareholder suits 10 years from now, since post-factum civil litigation will be the only real regulation of the startup market," he reckons.

How quickly the lessons of the first dot.com bubble have been forgotten. ®

We have invited Steve Bong to put the case for failing to scrutinise unprofitable crowdfunded web startups this week.