Pic Astroboffins using a new multinational observatory have spotted evidence of two planets orbiting nearby star Fomalhaut – which is just 25 light years away and cloaked in a comet graveyard. 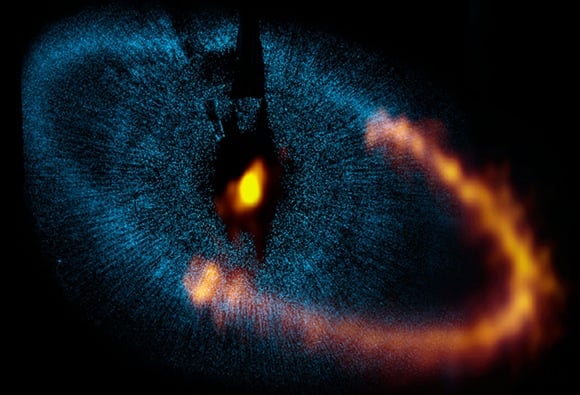 The Atacama Large Millimeter/submillimeter Array (ALMA), a joint project between Europe, the US, East Asia and Chile is still only in its Early Science phase, with just a quarter of its antennas available for this observation, but it was still capable enough to confirm the unsure theory that the star has a two-planet system.

In 2008, the Hubble Space Telescope had spotted the planet closest to Fomalhaut, which was then thought to be larger than Saturn, but follow up infrared searching failed to find it, leading to some doubts about whether there were any planets there at all.

"ALMA may be still under construction, but it is already the most powerful telescope of its kind. This is just the beginning of an exciting new era in the study of discs and planet formation around other stars", said Bill Dent, ESO astronomer and team member at ALMA, which is due to be finished next year.

Using ALMA, the astronomers snapped exceptionally sharp pics of the ring of dust circling the star, which allowed the boffins to figure out that the planets were there and their probable size. The cloud is formed by what scientists say is the equivalent of thousands of comets smashing into each other every day.

These images show that the inner and outer edges of dusty circle have sharp edges, indicating that the stuff is under the gravitational effects of two planets, one closer to the star and one more distant.

The boffins were also able to get their computer simulations to spit out the likely size of the worlds, which are probably larger than Mars but no bigger than a few times larger than Earth, much smaller than astronomers previously thought.

The planets' relatively small size explains why infrared observations couldn't pick them up.

"Combining ALMA observations of the ring's shape with computer models, we can place very tight limits on the mass and orbit of any planet near the ring," said Aaron Boley of the University of Florida, chief astronomer of the study. "The masses of these planets must be small – otherwise the planets would destroy the ring."

The dusty belt itself has also been the subject of scrutiny for boffins at ESA's Herschel Space Observatory, who have figured out that the particles are formed by the collision of up to 2,000 icy comets every day.

Herschel has been looking at the orbiting circle at far-infrared wavelengths and has found the dust temperatures to be between -230° and -170° C.

To sustain the whole circle, the equivalent of 2,000 lkm-sized frozen space-rocks must be demolished in impacts every day, leaving small fluffy dust particles behind, which means there are between 260 billion and 83 trillion comets floating around in the belt.

The study of the formation of Fomalhaut's dust belt was led by Dr Bram Acke at the University of Leuven in Belgium using Herschel pictures.

The ALMA images were taken in September and October last year and the full study will be published in Astrophysical Journal Letters. ®