Security researchers have discovered a strain of fake anti-virus software that tries to intimidate supposed file-sharers into paying for worthless software.

SFX Fake AV, first detected by freebie antivirus scanner firm Malwarebytes, blends the features of scareware with those more associated with ransomware Trojans. The malware stops any legitimate anti-virus package from running on compromised PCs, something common to other other scareware packages. But this particular strain of malware goes further than this by stopping Process Explorer (procexp.exe) and preventing browsers from loading – tactics designed to force marks to complete the ‘input credit card details’ screen and hand over money for the scamware.

The evil app also falsely tells prospective marks that they are going to be sued for breaching SOPA legislation, claiming it has detected torrent links on PCs. It offers to get around this problem by activating an "anonymous data transfer protocol" for torrent links, another inducement aimed at persuading prospective marks into paying for the worthless security app.

This latter feature differentiates the malware from strains of scareware we've seen in the past, which demand money after supposedly detecting "offensive materials" on PCs, sometimes under the guise of a police fine. SFX Fake AV, by contrast, offers a supposed way to evade law enforcement attention. 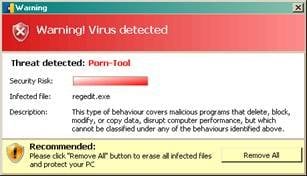 Bruce Harrison, VP Research at Malwarebytes, said: "SFX Fake AV is morphing at a relatively fast rate, so it is something that signature-based vendors will have to watch out for as there will be an increasing number of variants in the wild. Also, the use of Dropbox as a delivery mechanism is a something that the industry is going to have to take into account and protect against, as it is an emerging trend." ®