Rackspace Hosting, one of the contenders in the fight to take on Amazon's eponymous Web Services division as the dominant public cloud, is finally confident enough in the OpenStack wares to start its internal rollout of the software underpinning its Cloud Servers, Cloud Files, and other services.

By doing so, Rackspace is beating Hewlett-Packard to market with the first big public cloud based on the "Essex" release of OpenStack which was released a week-and-a-half ago. Rackspace is one of the two founders of the OpenStack cloud fabric project along with NASA.

HP is planning to put the Essex code out as the underpinnings of its HP Cloud Services as a public beta beginning May 10, and has had compute and storage clouds in a private beta test since last September. HP has not made any commitments as to when its OpenStack-based public cloud will go into production.

Rackspace is a bit more familiar with the OpenStack code, and while the company's top brass has been careful about getting ahead of itself in making promises, Mark Interrante, vice president of products at Rackspace, tells El Reg that after an undisclosed number of beta testers put the OpenStack code through the paces with Rackspace's Cloud Servers and Cloud Files services, the company will start offering OpenStack-backed compute and storage cloud services to customers beginning May 1. Cloud Services is analogous to Amazon's Elastic Compute Cloud (EC2), and Cloud Files is analogous to Amazon's Simple Storage Service (S3) – although the two are not compatible with each other.

The switch to OpenStack for the Cloud Files service is not much of a big deal, since the code behind Cloud Files was developed by Rackspace (and formerly known as CloudFS) and given to the OpenStack effort as project Swift. The move to OpenStack for the Cloud Servers offering – which is based on the Nova code contributed by NASA – is a much bigger deal because it really is different. (The Essex code also includes three other modules: the Horizon administration dashboard, the Keystone identity manager, and the Glance image service.)

Interrante says that Rackspace has been testing the Essex release in beta for the past six months, and that the shift to OpenStack will not be particularly noticeable to customers when it happens, except that it can spin up servers anywhere from two to four times faster, is more reliable, and has a much more capable set of APIs from which to monitor and manage servers. (Yes, he was being sarcastic as well as fanatical.) The pricing on Cloud Servers will remain the same, as will the configuration options and image types for specific server images.

Customers will not be forced to take OpenStack if they sign up for Cloud Servers in May, but by July or so OpenStack will be the default compute cloud at Rackspace and customers will be moved over from the homegrown code to Nova in the ensuing months. Interrante was not sure at press time how many customers would need to move from Cloud Servers to OpenStack, but the Cloud Server and Cloud File customer bases together have a total of 170,000 customers.

In addition to moving to OpenStack for its cloud, Rackspace is also rolling out a new web-based, self-service management portal for its cloudy customers, called Rackspace Cloud Control Panel. The tool is written in Python and dynamic JavaScript, and is free to customers who use either Cloud Servers or Cloud Files. Here's a screen shot: 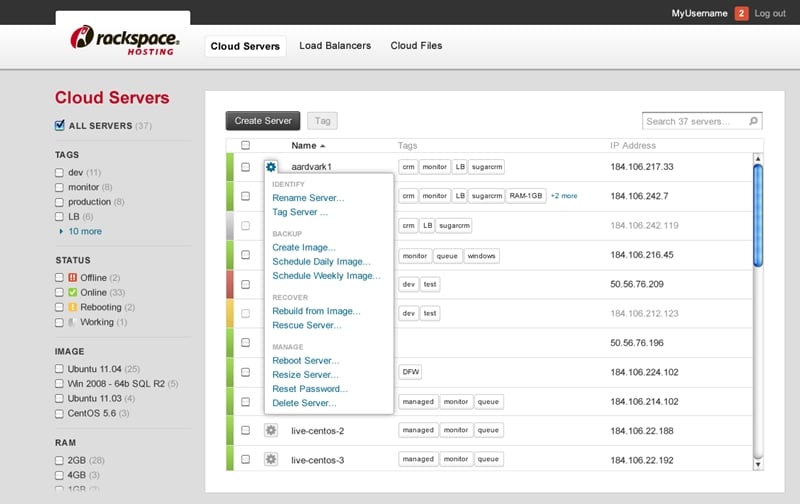 Interrante says the plan is to add other Rackspace services, such as managed hosting, to the control freakery tool so that all Rackspace customers can monitor and manage any service from the same portal. This software is still in early access, and the ability to span multiple data center regions and so server tagging is on the way. No word on when it will be in production. Rackspace has also put out Cloud Monitoring into early access, which is based on the code it got from its acquisition of Cloudkick. The Cloudkick cloudy management service was originally designed to reach into Amazon and Slicehost cloud services, and eventually it supported Rackspace Cloud. Rackspace bought Slicehost in October 2008 and that is one of the underpinnings of its more modern Cloud Server offering today.

In addition to the basic infrastructure clouds and the stuff to monitor it, which is coming along at Rackspace, the company is also putting out a database service, a block storage service, and a virtual networking service into beta testing.

The database service is based on an extension of the Nova cloud controller and the MySQL relational database that has been developed under Project Red Dwarf. At the moment, the database service can run atop Cloud Servers with the old Rackspace code or the new Nova controller. Red Dwarf wraps MySQL database instances in OpenVZ containers, which are virtual private servers running atop the Linux kernel and which have a shared kernel and file system. This is a much lighter way to virtualize and then cluster MySQL databases instances than using a Xen or KVM hypverisor – according to the Rackers who run the Red Dwarf project – but if you want Xen or KVM, Red Dwarf is open source and you can tweak it to your heart's content. You can also switch out MySQL for another Linux-compatible database in the service if you want, and Rackspace is welcoming such efforts in the Red Dwarf project – although it may not commercialise them in the Cloud Databases service.

By the way, the Cloud Databases service is backed up by fast SAN storage for performance reasons, and Interrante says that based on early benchmark tests it offers 2X to 3X the performance of other cloudy database services, such as Amazon's MySQL-derived Relational Data Service (RDS).

The Cloud Block Storage service that also goes into beta testing today is based on the Lunr, a block storage service created by Rackspace that was merged into the Nova controller's volume manager last summer.

The software-based virtual network service, which will eventually become an option on the Cloud Server service, is based on the extensions to Open vSwitch virtual switch that have been created by Nicira. It also draws from various OpenStack components, including the Glance image service, the Melange IP address management service, and the Quantum network-as-a-service, er, service.

No word on when the database, block storage, and virtual network services will be ready for primetime. ®