PRs feel that they are excluded from making edits to Wikipedia even when they are trying to correct factual errors, a survey by the journal of the Public Relations Society of America has found.

Though 60 per cent of PRs questioned said that the Wikipedia pages of their clients contained factual errors, they were a) unclear as to how to edit the pages and b) that when they did attempt to request changes through the Talk pages, a quarter (24 per cent) found that they did not receive any responses to their requests.

Those who made direct edits to pages of clients found that the edits "always stuck" 31 per cent of the time. 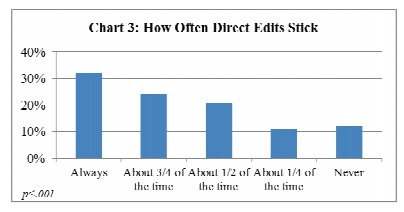 Wikipedia's rule is that people should not edit Wikipedia directly if they are a paid advocate for a company. It's described as a Bright Line rule – one where no balancing factors are taken into account.

But Wikipedia's rules are conflicted because a separate provision allows for PRs to change certain facts on the pages of the people and companies they represent: including fixing minor errors in spelling and facts, providing references, and adding or updating facts such as "a person's date or place of birth, a company's location or number of employees".

Ambiguity over what constitutes a minor fact is part of the issue.

It is in making those changes that PRs and company representatives have trouble. Talk pages and the prescribed procedures don't always work as they should argues the survey.

Of the facts found to be in error – the majority seemed to revolve around company history:

The most common error types as selected by respondents who indicated that they had errors currently on their company or client’s Wikipedia article were historical information (68.5% of PRs reported this), dates (37.7%), leadership or board information (37.4%), financial figures (28.8%), criticisms (27.1%), spelling (21.2%), and other (35.2%). The “other” category included errors about product information, links, locations, general facts, and even company names.

The survey's author concludes with a call for Wikipedia to remove the "bright line" rule and allow for a more nuanced way of letting PRs correct inaccuracies.

Oftentimes, public relations/communications professionals are the most knowledgeable about a topic, but according to Jimmy Wales, they should not edit the encyclopedia that “anyone can edit, use, modify, and distribute”

PRs were also afraid of a media backlash from editing stories, such as occurred when Wikipedia suspended 10 accounts after an investigation into PR firm Bell Pottinger's edits in 2011. We've asked Wikipedia for its response to the survey, and we'll update when it gets back to us. ®