Computer scientists in Ireland have developed a technology for Google Docs that allows for the "real-time" encryption of data before it is uploaded to the Google servers.

The CipherDocs system, developed by computer scientists at Trinity College, Dublin, is designed so that Google would not have access to the keys necessary to unscramble data held on its systems. The four computer scientists behind the technology are looking to establish a startup based on their work, based on initial seed funding from government agency Enterprise Ireland.

"It [the technology] means that enterprises can finally start to make use of the low-cost Google Apps suite in a serious way with the knowledge that their sensitive data is stored securely on Google's servers," said Hitesh Tewari, of the Department of Computer Science at Trinity College, Dublin.

"We are an early stage startup with four employees and have received €100,000 in funding. Our mission is to provide users and enterprises with simple and transparent encryption products that allow them to make the most out of the cloud computing," he added.

Although the initial connection between a Google Docs and Google's servers is secure, the user data is stored unencrypted on Google servers, leaving it open to viewing for anyone who has or obtains the right level of access. This can pose problems for organisations and individuals that wish to store sensitive information (such as financial data, project plans, patient records etc) in their documents.

The CipherDocs software plugin encrypts user data in "real-time" (ie, as the user is typing into their browser window), prior to it being sent to Google's servers, addressing this problem. The technology is initially available as a Firefox plugin that uses Advanced Encryption Standard (AES-256) to encrypt data.

Although it was initially available only for Word-style document files, the team behind the technology is looking to extend its functionality to support spreadsheets and presentations as well as on browsers including Chrome and Internet Explorer.

The technology already goes beyond simple document encryption. Google Docs lets users share their documents and allows multiple people to collaboratively edit a document. CipherDocs preserves this core functionality and allows for the secure sharing of Google Docs. This is accomplished by "transparently and securely sharing the document encryption key between the intended recipients" through a KeyHub service. A mobile keychain add-on means the user can access their documents from any machine, providing they have the plugin installed.

"In the event a user loses their laptop or the hard disk dies, they do not lose access to their documents," the CipherDocs team explain. "At no point do we have access to user decryption keys as these are at all times protected by a user-chosen master password." 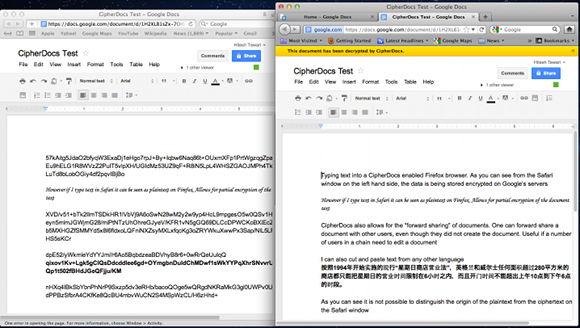 Next page: A work in progress...
Page: