After years of waiting for the contenders to open fire, the Oracle-Google shooting match is now on, and the bullets are pretty expensive. The opening salvos have landed, so let's take stock.

It’s worth keeping at the back of your mind how strange it is to be here at all. Judge Alsup has spent three years trying to persuade both parties to settle privately – they’re haggling over the odd billion. But he hadn’t counted on the obstinacy of the Two Larrys. So to the case.

Sun wanted to pull off the hitherto impossible goal of keeping its Java platform open enough to achieve widespread industry adoption, but closed enough so it could retain control to avoid fragmentation. Opening your code is easy, and controlling your proprietary code is easy, but Sun wanted a unique middle way. So the procedures Sun wrapped around Java are pretty complex – and they have changed over the years. But Sun achieved what it had pretty much wanted: extensive industry use of Java, and absence of fragmentation.

That was, until Android.

In a nutshell, Google admits copying Sun Java code into Android. Google maintains that the code it copied didn’t require a licence. Google also argues that the Android platform, in which Java language code is written against Java classes (before being crunched into something that Google’s VM can run) doesn’t need a Java licence.

Oracle's case against Google is laid out in a 90-page slide presentation released at the start of the trial this week.

Sun launched Java in 1995 and Oracle gobbled up Sun in 2009. The hostilities began that year – but from new evidence we can see they were always simmering under surface. Android was founded in late 2003 and snapped up by Google two years later. That year, in 2005 [p38 of the slides] Android founder and chief Andy Rubin wrote to Larry Page: 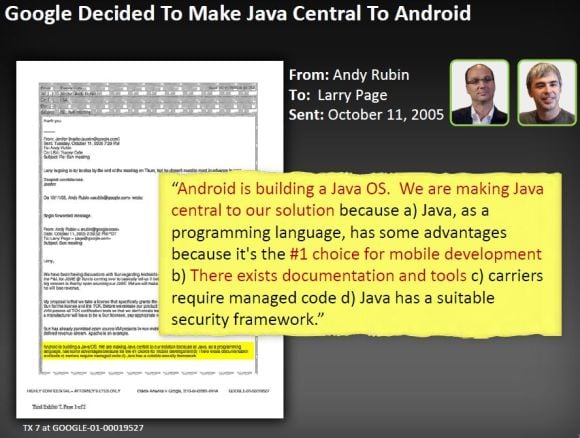 Google wanted to open-source Android, but it knew Sun was uneasy about that. In October 2005, Rubin suggested to Larry Page that Google ought to pay Sun for a Java licence, and swallow the cost. According to Oracle’s narrative, negotiations were dragging on into 2006, and Google should have at that point contemplated a non-Java option – an avenue quashed by Google manager Brian Swetland in August 2006. By 2007, Android’s attitude could be summed up as: ‘Hey, what the hell’.

I don’t see how we can work together and not have it revert to arguments of control. I’m done with Sun (tail between my legs, you were right). They won’t be happy when we release our stuff, but now we have a huge alignment with industry, and they are just beginning.

In 2007, Rubin noted how cunning Sun had spun the law around Java. The awareness that Google was striking out into new and dangerous territory was evident in 2008: taking a license was “now water under the bridge” and excerpts from emails show engineers and management coyly avoiding the subject in discussions.

“Please don’t demonstrate to any Sun employees or lawyers,” Rubin warned an engineer in 2008, as he prepared to take Android on the road. (As an aside, here’s the engineer’s blog from his first fortnight on the job at Google: “As with most companies that rely on their IP, you learn very quickly that Google has a lot to lose from loose lips, and I don't want to see that happen.”).

The “What the hell” strategy is in Google’s DNA: there are echoes of the Google Book project and Google’s acquisition of YouTube. In each case it knew it was potentially in the wrong, and acquiring huge liabilities. But it pressed on.