Oracle adds that during this period Google hired key Sun Java personnel, who were working under former Sun executive Eric Schmidt. Schmidt had joined Google in 2001. While this is true, the implication is that Google needed these stars to create its “Java OS”. In fact, key Sun staff drifted to the Chocolate Factory throughout this period, preceding Google’s interest in Android. But the testimony of one defector has attracted the most coverage.

Lindholm concluded that all the alternatives “suck[ed]” and “we need to negotiate a license for Java”. Google fought a long, hard but ultimately unsuccessful battle to keep this email out of court. This week Larry Page couldn’t recall who Lindholm was, or making the request. Oracle details the code copied from Java into Google. This makes it difficult for Google to argue it was any kind of clean-room implementation of the key Java libraries (classes). Private classes were copied verbatim. And Android remains the only Java system in the world that doesn’t have a Sun/Oracle Java licence. 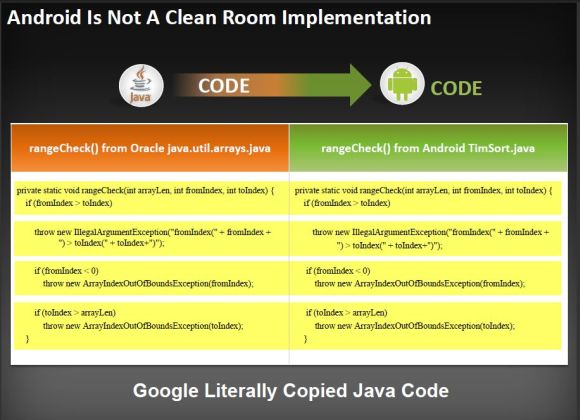 For its part Google has shown the court statements by Sun’s last CEO, talkative Jonathan Schwartz. Schwartz “applauds” Android and vows to support it, in 2007. It’s thin stuff, though. As Florian Mueller points out in his analysis, Schwartz’s comments cut little ice with the Judge.

That’s the meat of Oracle's copyright case - the trial is still ongoing. Patents will follow in the weeks to come. In court this week, the exchanges were largely theatrical. Lindholm was hung out to dry by lead lawyer David Boies (which is all Boies had to do). Google executives including Page have adopted the Clinton-Gates defence of not really being able to remember anything that was going on.

So... it doesn’t look great for Google. The principle is if you use someone’s stuff you pay for it, or invent your own. But as I pointed out earlier this week, it’s a peculiar situation. Oracle’s victory might not get it the damages it wants – the judge has consistently scorned the size of these claims – and it may extend copyright into new areas, causing huge confusion for the industry. But the case falls into a murky area where simple, clear sensible law should exist. When that happens, the lawyers are the biggest winners. ®