DARPA overjoyed that its hypersonic glider came apart, blew up

REAL inventors and scientists cause explosions

Maverick Pentagon crazytech agency DARPA has awarded itself a firm pat on the back after a detailed examination of its second HTV-2 test flight last year, in which the high-tech Mach 20 glider was destroyed 9 minutes into the trial and crashed into the Pacific. 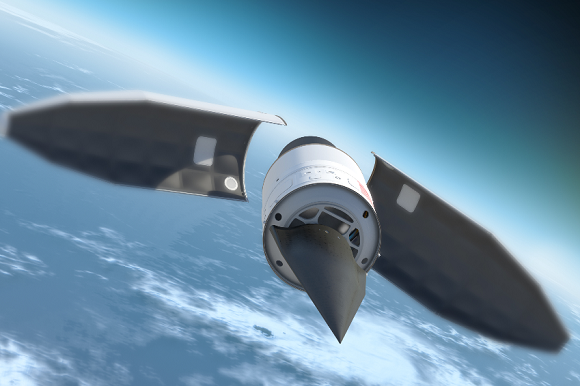 Down we go, into the wild blue yonder

“The greatest achievement from Flight Two was that we successfully incorporated aerodynamic knowledge gained from the first flight into the second flight,” boasted Major Chris Schulz, programme chief for the HTV-2 at DARPA.

Schulz and his fellow aero-boffins are chuffed about the 2011 flight even though the HTV-2 didn't reach its planned target because it didn't come to bits as quickly as the first HTV-2 did in 2010. On the programme's inaugural flight the glider separated from its launch rocket and reentered the atmosphere, but went out of control almost at once.

On the second attempt last year, according to an investigating review board, the modified second hyperglider did much better - managing to achieve controlled hypersonic flight following reentry and pull up phases.

Unfortunately, after a while the terrific heat generated by boring through the upper atmosphere at Mach 20 began to destroy the radical high-tech aeroshell of the HTV-2 and bits began to come off it. The pieces of wreckage created powerful shockwaves as they burned off. The HTV-2's control system managed to cope with several of these, but finally a particularly large bit broke off the doomed hypercraft and it went out of control. Automatic safety systems - installed to prevent a rogue craft hurtling off randomly and perhaps hitting a ship or inhabited island - then cut in and forced the HTV-2 to crash into the ocean.

"Data collected during the second test flight revealed new knowledge about thermal-protective material properties and uncertainties for Mach 20 flight," says Major Schulz: presumably in this case the new knowledge is that the crafty carbon-carbon aeroshell tech of the HTV-2 is not - as had been hoped - up to the job.

No further HTV-2 flights are planned, but the data gathered by the project is there for use in ongoing hypersonics research. The earliest real-world application seen for hypersonic flight is the "prompt global strike" aspiration held by the Pentagon in which the US military would like to be able to deliver a warhead to any spot around the planet in less than an hour.

Actually the US military can already do this, using an intercontinental ballistic missile to send a weapon round the world outside the atmosphere, so largely avoiding the extremely difficult technical problems of boring through air at many times the speed of sound. However it is generally felt that an ICBM launch - no matter that it might be carrying only a conventional warhead - might trigger a global nuclear war, so plans to adapt ICBMs to carry conventional precision ordnance were dropped and hypersonics research has continued fitfully under the Prompt Global Strike banner.

The ICBM concerns don't make an enormous amount of sense in many ways - there would be nothing to stop the USA from putting nukes on hypersonic missiles after all, and like ICBMs they would be extremely difficult or impossible to shoot down - so presumably they too would be similarly prone to triggering nuclear wars if launched.

The truth of the matter is probably that people just want hypersonic technology, which could be useful for much more desirable things like superfast airliners; or better still truly re-usable and economical orbital spaceplanes. DARPA has taken a short step toward such things with the HTV-2 program, so we can offer the agency a limited vote of thanks for that.

There's a handy graphic of the HTV-2's planned trajectory, with linked explanatory vids, here: and more on the programme for those interested here. ®