Why not a launch rail for the Vulture 2 spaceplane?

There's some lively debate going on down at the Reg forums LOHAN mosh pit regarding whether using a metal rod launch system for our Vulture 2 spaceplane really is the way to go.

We're delighted that you lot have taken the time to do a bit of head-scratching on what is one of the critical mission decisions.

Our biggest concern is the temperature at altitude. We expect to fire up the aircraft's rocket motor at -60°C, so we need to ensure it doesn't freeze to the launch platform. Our proposed solution is also the simplest, and we always work to the principal of "less is more". 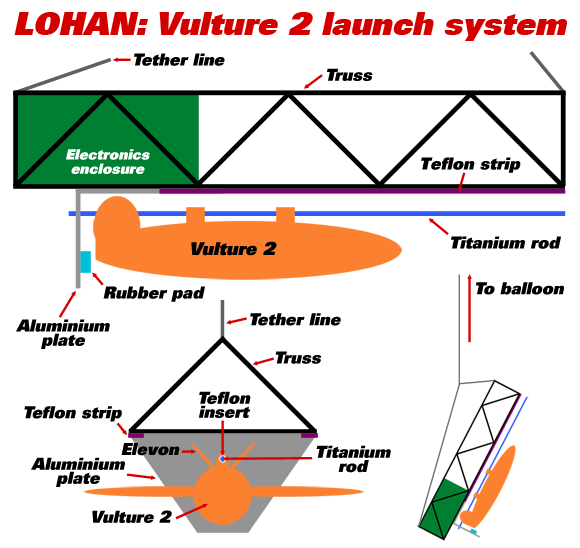 ...and a few points of clarification:

Well, this cunning plan doesn't convince some of you. Tempest8008 wrote:

I'm still concerned about the single launch shaft. During ascent if the wind buffeting is heavy enough it could cause the wings to smash into the teflon-coated girders and cause some significant damage.

Any thought of extending the teflon strips down until they are just standing off the wing surface? That should minimize the chance of wing damage due to buffeting. You wouldn't want them constantly touching the wing due to the chance of freezing, but a small (0.5") gap should give the chance for the wings to move still, freeing them up from any potential stickiness, but reducing the overall roll movement so as to prevent damage.

In reality, the distance between the wings and the Teflon strips will be very small – just enough to allow the aircraft to "rock" on the launch rod and prevent the Teflon inserts in the fuselage from freezing to the rod.

FYI, we've just sourced a reinforced Teflon tube we reckon will do the job, but LeeE pointed out the biggest potential pitfall with the idea:

Well, we think that if the inner diameter of the Teflon insert is slightly larger than the diameter of the rod, that should avoid potential jamming. As we've previously said, can test this set-up at low temperature, since we'll be needing some dry ice for the Rocketry Experimental High Altitude Barosimulator (REHAB) experiment. We also have a low-temperature grease available, should LOHAN's rod require lubrication.

We'll see how the plan pans out in due course, then, although several readers have serious doubts. Eponymous Coward chipped in with:

Doesn't look too stable to me. Where I live every house has an aluminium channel embedded in the concrete ceiling by the windows, in which nylon glides slide to hold the curtains.

If said channel could be supported the length of the truss, and the glides secured to the LOHAN, it might be a readily available, stable launch runway.

We've considered the launch rail idea in the past, but really do believe it's an invitation for the whole thing to ice up. Naturally, we're still open to suggestions, so keep 'em coming.

Here's another concern, courtesy of Joeman:

Is the launch rail [rod] long enough to build sufficient airspeed for the wings to generate lift in the thin atmosphere?? or just relying on rocket power to keep the nose pointing upwards?

If the aircraft stalls as it leaves the end of the rod and pitches downwards, will the flight systems apply elevator to correct the attitude, or will the arcraft rocket propell its self nose down??

The Southampton Uni Vulture 2 design boys have been doing the sums, based on a mightier thruster than the AeroTech RC 32/60-100NS we tested late last year.

We're not going to name the unit in question just yet, but suffice it to say it'll propel the Vulture 2 off a 1.5 metre rod at a lively rate of knots.

The aircraft is designed to correct its attitude, and in case you're thinking that there's not enough atmosphere up there for the control surfaces to be effective, we'll tease a bit more by saying the Vulture 2 will quickly reach a sufficient speed for the ailerons, etc, to bite.

Hopefully, all of the above will give the sceptics among you a bit more confidence in our launch plan, which will of course evolve as testing highlights areas for modification and improvement.

One thing which is already on the revision list is the aluminium plate shown in the above graphic. A horrified LeeE protested:

This is a _really_bad idea. Y'know rockets work by equal and opposite reaction? Well the rocket will go forwards because of all the stuff it's chucking out the back but all this stuff coming out the back will hit the backplate, forcing it and the entire truss backwards. However, because the truss is suspended from above what will happen is that the truss will pivot backwards, swinging the launch rail downwards just as the plane is moving along it.

Agreed, we're going to reduce the plate to a slim mounting point for the rod, so the rocket motor exhaust doesn't pivot the truss. We think a test with a mock-up of the truss and a small rocket is in order, to see what happens.

Here's the vid of our first fantastical flying truss test, showing how we decided to go for the inclined truss configuration:

The current thinking is to have a very long line between the truss and the balloon, to enable a launch angle as close to vertical as possible. Again, we'll have to test that to see if there are any issues. Watch this space...

In the meantime, keep your ideas and suggestions coming right here. ®