Is this an RTM I see before me?

Windows 8 will be signed off and released to PC manufacturers in June, paving the way for a September or October launch.

Microsoft will deliver what it's calling a "release preview" of Windows 8 in the first week of June, Windows chief Steven Sinofsky has revealed.

Sinofsky announced the news at Windows 8 Dev Days in Japan, which was promptly tweeted by Microsoft’s Building Windows 8 blog, below. 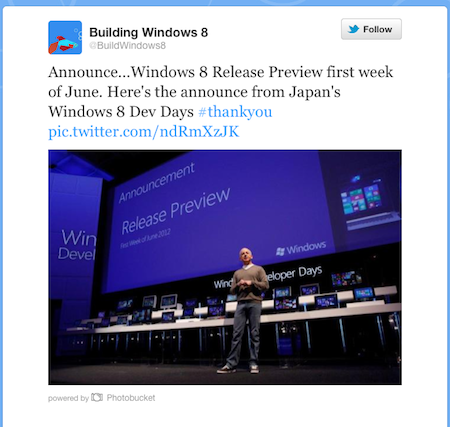 An RTM by any other name: Steven Sinofsky announces the Windows 8 "release preview"

There were no more details, but based on delivery of Windows 8 to date and compared to launches past, this is what would normally be called the Windows release to manufacturing (RTM) code – the version of the new code Microsoft considers finished and which it releases to partners to install on new PCs and press into CDs.

Only, in keeping with the reworked lexicon of Windows, that meant the February beta was called a "consumer preview" – and it looks as if the RTM is now a "release preview".

On such minute affairs are hours of mental manpower expended and pounds of corporate prestige invested.

Image and appearance aside, the June date suggests we're looking at an actual official launch of Windows 8 in either September or October. The latter has become traditional for Microsoft – with the exception of Windows Vista – in recent history. There's usually a two- to three-month lag between RTM and launch, suggesting that if the "release preview" is indeed the RTM, then Microsoft is actually looking at a September release date this time. August is a possibility, but that's prime holiday time so would mean weaker sales. ®