A partially-tetraplegic patient in Switzerland has controlled a robot 100 km distant via a head cap sensing electrical signals from his brain.

According to the Associated Press, the experiment is the first time a “mind control” interface has been used by a partially paralyzed person, and without invasive implants.

From his hospital ward in the Swiss town of Sion, Mark-Andre Duc was able to control the robot at Lausanne by imagining acts like lifting his fingers. The skull cap sensed the electrical signals associated with those movements, and directed the robot left or right around the Federal Institute of Technology in Lausanne. 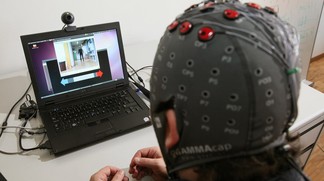 Think about this: the Federal Institute of Technology's skull cap.

The device back at Lausanne comprised a laptop mounted on a mobile platform.

Having lost the use of his legs and fingers after a fall, Duc told AP that on a good day, the robot is easy to control – but tiredness or pain make it more difficult.

To make controlling the robot less taxing for the patient, the researchers have programmed the robot to continue acting on an instruction (for example, “move forward”) until it’s told to stop.

The researchers in the Institute’s Center for Neuroprosthetics, are working on an “electric skin” in the hope that they could create prosthetics that have the mobility and sensitivity of a human hand. ®