Tech City hailed as saviour of THE ENTIRE PLANET

"Tech City can be a catalyst that improves the lives of the whole area, the city, the country and in fact the whole world," the Prime Minister's ambassador to Tech City told Queen Mary University's Mile End Group in a lecture this week.

"Technology diplomat" Ben Hammersley – who has worked as a journalist at The Times, Wired and the BBC – pulled up Buddhist parables and a technique that could be described as "asking why instead of measuring things" to explain his vision for the collection of technology and internet businesses around Old Street in Shoreditch, London - an area dubbed Tech City. 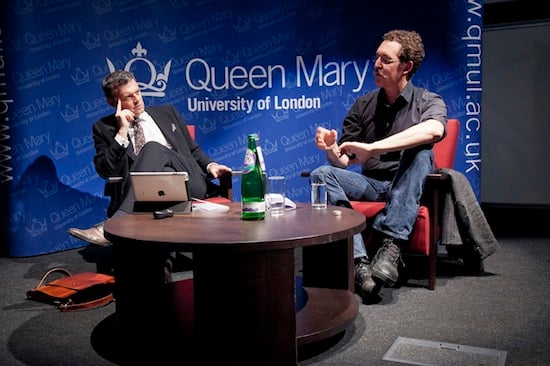 Money and making it

The issue of the financial viability of many of TC's fledgling businesses is one in which The Register's very own Tech City correspondent, Steve Bong, takes a keen interest. Hammersley had several things to say on the matter:

Yes, some people will get rich. But if you ask why enough times, you'll discover that getting rich isn't the point.

Questioned as to how companies could fulfill his desire of contributing to the community if they weren't making any money in the first place, Hammersley said that companies shouldn't do community give-back as some kind of add-on after they'd made lot of money, but that the business should be "focused" on the community from the get-go.

"I see that in a lot of the design companies and in the startups I see that in the sort of kindness: not just in terms of carbon but also to each other. For example, companies that turn off their email servers at 6.30pm every day. It just makes things better for everyone."

He elaborated: "The big difference between Shoreditch and the City is that for us, to make money no matter what is seen as a moral failing.

"I would like to measure our success by the happiness and joie de vivre of everyone who lives around there – not the baseline profit of some multinational companies who rent space there."

"We have a community that has become a place that nurtures people into a set of skills that can be a blessing for everyone and everyone in this community, from the imams in the mosques to the academics in the universities, to the graffiti artists and the market traders and the strippers [who] have all come together to create a place which seems to be about to create a new [sic] renaissance."

Drawing upon a lengthy Buddhist parable about interconnectedness, Hammersley described his plans for an upcoming event at the Barbican which involved dancers, app developers and fashion designers: "At the Barbican we'll be getting all these creative people together and just making them look at each other."

Questioned as to what specifically the Tech City initiative was doing to usher in the renaissance, Hammersley said: "It's not a matter of policy, but one of the things the government can say is: 'We're going to have a renaissance – let's do it'.

"Yes we need more developers. We also need more poets and more artists and more hoodies and more kebab shops, more people in the rag trade, more academics and anything else that you want to be."

At this time of double-dip recession, readers may be pleased to hear that Tech City is about to solve all of our problems. ®