Review Ubuntu 12.04, the fourth major Long Term Support (LTS) release for Ubuntu, is serious stuff. LTS editions of Ubuntu are delivered every two years and have extended support from Canonical. They also set the look of the coming years' releases. And this LTS, codenamed Precise Pangolin, has had its support extended from three to five years by Canonical.

Why does all this matter? Because Ubuntu 12.04 will be the first time many of Ubuntu's more conservative customers – especially those in business – will face the controversial Unity interface that replaced the conventional GNOME. It re-oriented the interface for more touch and introduced a more 3D look and feel.

Also in the PC edition of this LTS is HUD: Head Up Display. The idea of the HUD interface is to dispense with the tried-and-tested drop-down menus setup, and instead to allow users to access features and invoke commands using search and natural-language autocomplete. 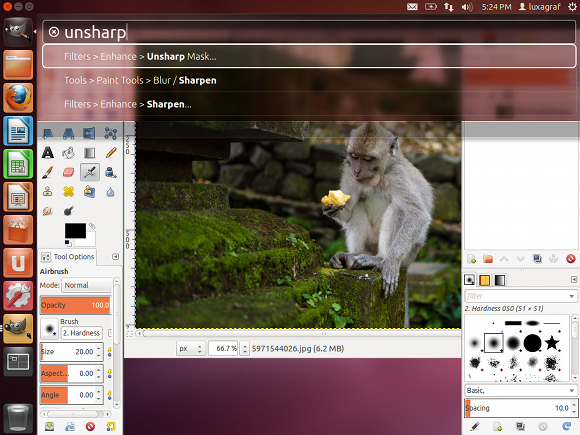 Canonical has also introduced a "remix" dubbed Ubuntu Business Desktop Remix. Business Remix is aimed squarely at the corporate market and strips out features such as the Rhythmbox music player and the various games, all normally included in a standard Ubuntu package. Instead, Business Remix users will get VMWare View (which means there's an EULA), OpenJDK 6 and other business workflow software.

Naturally, the Business Remix isn't meant for the everyday Ubuntu user. And when he announced the remix, Canonical and Ubuntu founder Mark Shuttleworth was careful to say that Ubuntu isn't creating its own version of the RHEL/Fedora arrangement. Instead he emphasised that the Business Remix was just another example of Canonical doing more for its actual customers, presumably without also harming the community of users around it.

The emphasis on long-term stability, business-oriented remixes and corporate users doesn't mean there isn't anything new and interesting in Ubuntu 12.04 or that all the new features target the suits. Rank-and-file Ubuntu users itching for some more Unity pop do also have HUD, too.

Canonical calls HUD the "menu of the future". How does it rate?

Unlike the Unity interface, which, despite improving with every release, still doesn't quite feel as powerful as the GNOME 2.x interface that it replaced, the HUD is immediately useful and works just the way you'd expect it to. HUD is especially helpful in applications with menu items that go several layers deep, for instance, GIMP. Instead of mousing to the Filters menu, then selecting Sharpen, and then selecting Unsharp Mask, you can simply hit the alt key and type "uns" and the top hit is Unsharp Mask. Just hit return and the item opens.

Of course GIMP is an app that lends itself to the mouse so switching to the keyboard to use the HUD isn't always faster. Where the HUD might really shine is in text-oriented apps like various parts of the LibreOffice suite. Sadly, as of Ubuntu 12.04, the HUD doesn't yet work with LibreOffice, though you might think it does. It's somewhat confusing because the HUD is a global menu. Hit alt anywhere in Ubuntu 12.04 and the menu will pop up and you can indeed search. However, you'll never see any results for LibreOffice menu items.

Despite that interface quirk – which will be less of a problem when there's more supported applications – HUD may well be the best part of Ubuntu 12.04 and the best idea to come out of Canonical's effort to rethink the user interface. Not only is it useful today, the HUD helps make Unity feel more (wait for it) unified. It moves searching to the top tier since it is no longer just something you do in the Unity Dashboard, but rather the go-to way to find anything on your PC.