The matching power of HUD's fuzzy search is also impressive; it rarely takes more than a few letters to find the menu item you're looking for and the results window has very little lag, even in a virtual machine.

If only Unity's Dashboard search features worked so well, but sadly the terrible search I complained about in the beta review remains unchanged for the final release: the Unity Dashboard is still incapable of finding the application GVim from the search string "vim."

In fact most of the Unity Dashboard remains largely unchanged from previous releases, though there is a new video search lens. The video lens will pull search results from the metadata of any movies in your Videos folder, as well as search online services like the BBC's iPlayer and YouTube movies.

There still aren't too many options to customise the Unity desktop without resorting to third-party software or hacks, but this release does finally add an option to at least hide the launcher if you'd like to save some screen real estate. 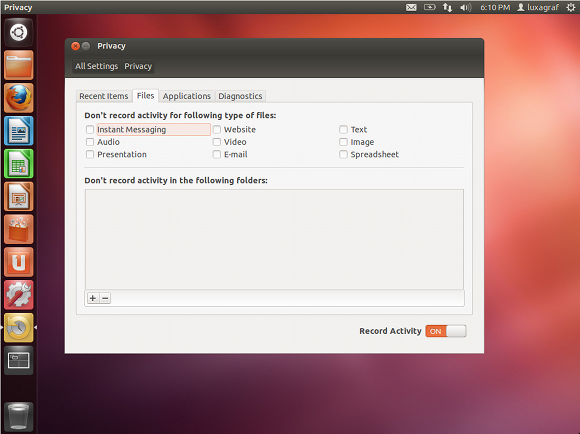 Also worth checking out is the new Privacy option in the System Settings panel. The Privacy feature lets you control what the system and even individual apps are allowed to log. You can also shut off history logging altogether or tell the system to automatically remove logged items after a period of time.

The Ubuntu Software Center has been tweaked slightly with the addition of some small but nice features such as an opt-in "Recommendations" feature for custom-tailored app suggestions: it's based on what you download after you turn it on. When you install a new application through the Ubuntu Software Center, the corresponding language support packages – things like translations and spell-check modules – are now installed automatically as well.

Under the hood Ubuntu 12.04 offers an updated Linux kernel and some new hardware support for ClickPads – button-less trackpads where you simply press down on the trackpad surface to "click" – which is handy for those running Ubuntu on Apple laptops or laptops with Synaptics ClickPads.

It's also worth noting that, for all its emphasis on stability, my testing on the daily build – two days prior to the official release – still found many of the default apps feeling a bit less than solid. Both the Ubuntu Software Center and Ubuntu One crashed, the latter several times, as did, ironically, the crash reporter app.

As someone who started off disliking Unity I'll admit I've come around. Somewhat. I'm still disappointed with the Dashboard's search capabilities, but with addition of HUD Canonical's overall vision is starting to make more sense.

Or perhaps it just suddenly seems less jarring when stacked up next to what Microsoft is planning for Windows 8. And that, along with the improvements in this LTS release, may well become a huge selling point for Canonical's corporate customers going forward. ®