Down and out after black hole close encounter

It takes a lot to kick a star out of a galaxy, but a group of Vanderbilt University astronomers say they’ve found a group of more than 675 stars that look like they’re headed for the exit door.

The escape velocity of the Milky Way is a very, very big number: more than two million miles per hour (skipping the stuff on the right side of the decimal point, better than 3 million kph).

To impart that kind of kick to something the size of a star probably needs an orbital close encounter with the supermassive black hole at the heart of the galaxy.

The astronomers, Kelly Holley-Bockelmann and Lauren Palladino, say the group of stars they have identified have two characteristics that suggest they’re exiles from the Milky Way: they were found in intergalactic space between our galaxy and the neighbouring Andromeda, but their colour indicates that they originated close to the galactic centre. 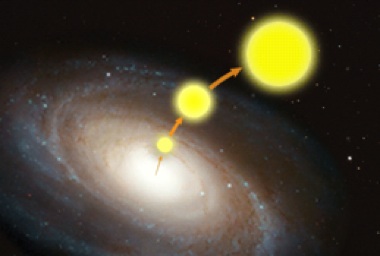 Their red colour isn’t, as you might guess, from their velocity: in this case, as Holley-Bockelmann explains, it comes from their high “metallicity”.

Metallicity, she says, indicates a higher proportion of elements other than hydrogen and helium, which is most typical of stars around the core of a galaxy. Older stars, or stars that formed near the fringe of a galaxy, have lower metallicity.

Even moving at hypervelocity speeds, these stars have been on the run for a long time: their 50,000 light-year trip from the centre to the edge of the Milky Way took about ten million years.

To accelerate to galactic escape velocity, the stars’ encounter with the galactic supermassive black hole probably involved one of two scenarios: they were once members of binaries that got too close, with one star swallowed by the black hole, and the other accelerated outwards; or alternatively, while the supermassive was swallowing a smaller black hole, a passing star got a hypervelocity kick from the interaction.

Holley-Bockelmann and Palladino found their large group of hypervelocity rogue stars by combing through data published by the Sloan Digital Sky Survey. Previously, only 16 hypervelocity stars had been identified, and they’re all still inside the Milky Way.

Their work is to be published in the Astrophysical Journal. ®