Dinosaurs were DRAINED of blood by GIGANTIC HORROR FLEAS

Huge insect bites 'like having a hypodermic shoved in'

As if impending extinction wasn't enough, dinosaurs were also plagued by giant mega-fleas that impaled their soft underbellies and feasted on their blood. 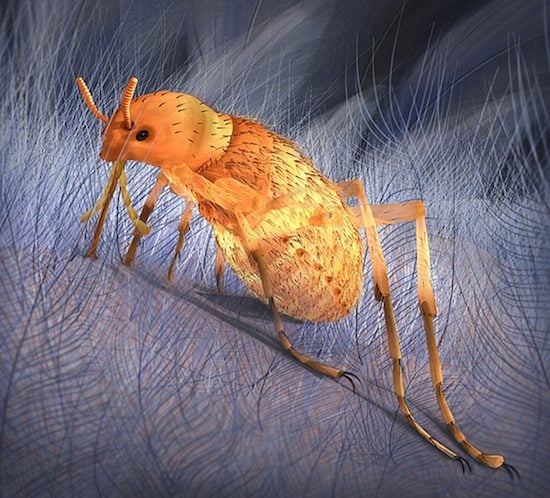 The super-fleas, which were around ten times the size of the fleas that bother dogs nowadays had an extra-painful bite because of their huge suckers.

"These were insects much larger than modern fleas and from the size of their proboscis we can tell they would have been mean," said George Poinar, a professor of zoology at Oregon State University.

"It would have felt about like a hypodermic needle going in – a flea shot, if not a flu shot. We can be thankful our modern fleas are not nearly this big."

The fossilised remains of these fleas were found by Chinese scientists who reported their discovery in Current Biology. The mega-midges could be the ancestors of modern fleas, but they're more likely to be a separate and now extinct kind of pest.

Pseudopulex jurassicus and Pseudopulex magnus had bodies that were flat, like a bedbug or tick, and long claws that could reach over the scales on the skin of dinosaurs so they could stay latched on while sucking their blood. Fleas today are more laterally compressed, have shorter antennae and are able to move quickly through the fur or feathers of their victims.

Poinar, who is an international expert in ancient and extinct insect life forms and wrote a commentary on the findings in Current Biology, said that 94 per cent of the 2,300 known species of modern fleas attack mammals while the rest feed on birds but the flea-osaurus was adapted to feeding on the biggest of the dinos. The prehistoric bugs were able to burrow in and latch on to the softer skin between the scales of massive dinosaurs. ®