Data warehousing giant Teradata has been building up its application portfolio ahead of its acquisition of Aprimo in late 2010, and now it is fleshing out its app stack by snapping up eCircle, the largest provider of digital messaging software in Europe.

The financial details of the acquisition were not disclosed.

eCircle is based in Munich, Germany and was founded in 1999 by Volker Wiewer and Thomas Wilke. They created email messaging software, and it has evolved into eC-messenger, a SaaS-based application that is run by eCircle on behalf of enterprise customers to do customized text and HTML email blasts, as well as SMS blasts, to customers. The company also has another push messaging product called eC-social that can reach out and touch you on Facebook, LinkedIn, and other social networks.

In January 2010, private equity firm TA Associates pumped €60m into eCircle to get a majority stake, buying out Wellington Partners, Cipio Partners, and Steadfast Capital, who had all kicked in an undisclosed amount of money into eCircle the in the prior dozen years. At that time, eCircle had 200 employees and 550 clients and was pumping out 5 billion email messages per quarter through its SaaS cloud on behalf of those clients. As of the Teradata acquisition of eCircle from TA Associates this morning, the eC-messenger service is pumping out 10 billion email messages per quarter for its more than 1,000 customers.

Darryl McDonald, executive VP of applications and business development and chief marketing officer at Teradata, tells El Reg that eCircle is the leader in digital messaging in Europe, with a strong presence in the United Kingdom, France, and Germany and ahead of Emailvision, also a cloud provider of campaign management solutions that is based in London and spans the globe. In the United States, the Aprimo marketing suite from Teradata has something of a foothold through its email messaging module, but ExactTarget and Responsys are the leaders in the blasting racket, in that order in terms of money and email volumes.

By snapping up eCircle, Teradata completes the big data-marketing-messaging trifecta: and will take a run at dominating the field because it can do more than just messaging, says McDonald. The plan is also to keep business away from companies like IBM's Unica unit, which McDonald says is a campaign management tool that doesn't have digital messaging. 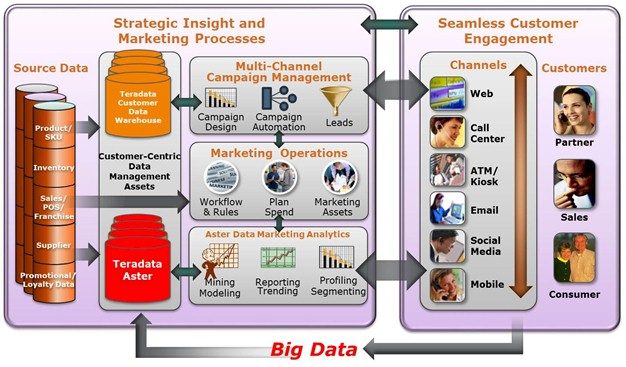 All together now: Teradata, Aster Data, Aprimo, and eCircle (click to enlarge)

Both IBM and Teradata have been on a tear buying up big data and marketing companies. IBM shelled out $480m for Unica in August 2010 and followed that up quickly with a big blue check for $1.7bn in September 2010 for data warehouse appliance maker Netezza. Teradata followed suit quickly thereafter, spending $550m to buy Aprimo in December 2010 and then columnar database and hybrid MapReduce-SQL database maker Aster Data in March 2011 for $263m.

So the question now is: Will IBM retaliate - and escalate - and buy up Emailvision, ExactTarget, or Responsys?

McDonald says that all 400 employees of eCircle are coming on board and will be integrated into the Aprimo division, which is the application software unit of Teradata. Aprimo has on the order of 500 customers, while Teradata overall has around 1,300 customers. These are large organizations with serious big data issues, not your mom and pop shops.

At first, the software engineers will work to integrate eCircle's eC-messenger and eC-social tools with the Aprimo marketing management software. This work should be done by the end of the year, says McDonald.

Aprimo has already been integrated with Teradata data warehouses and Aster Data big data munchers that can feed back information into the marketing system about clients to then have the Aprimo system kick out the appropriate sales pitch in some form of communication to Web sites, call centers, ATMs, kiosks, email, social media, or mobile devices through messaging tools.

The eCircle acquisition is expected to close in the second quarter of 2012, pending approval from European regulators. ®