Secure token biz Gemalto has landed the contract to print the next 80 million identity documents for the Driver and Vehicle Licensing Agency (DVLA), including next-gen driving licences to be deployed next year.

The new licences will feature laser-etched edges, making them even harder to copy, but they'll also be compliant with EU standards regulations. The contract also includes digital tachograph cards (aka swindle sheets), and biometric residence permits, although we're waiting for clarification on how the latter falls into the UK Driver and Vehicle Licensing Agency's remit. 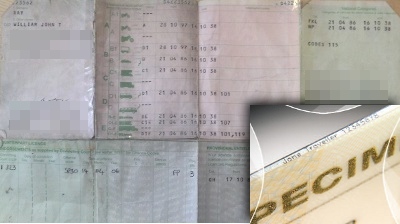 The pink licences were horribly easy to forge, unlike the edge-printed ones

Gemalto is better known, in these pages, as making the secure chips embedded in credit cards and SIMs, but in common with most players in that market it also prints difficult-to-forge documents even if (unlike some of the competition) it didn't emerge from that business.

It was formed in 2006 from the merger of Gemplus and Axalto, both important players in the secure token business, and has been busy expanding its offerings up the value chain into secure transaction management, landing the contract to run servers for the US operator cartel ISIS.

Like that deal, this is an open-ended contract, simply being referred to as "multi-year", but the DVLA contract is just about printing the millions of hard-to-forge documents at its Fareham site in Hampshire, which is being developed to integrate with the DVLA systems for personalisation. ®

Job Alert Something for everyone this week, including wannabe Vultures

Job Alert And if you're keen to place an ad, get in touch – it's free

Looking for an IT person? Searching for a job? Sign up for free ads – or browse through these job openings